Prices are the average nightly price provided by our partners and may not include all taxes and fees. Taxes and fees that are shown are estimates only. Please see our partners for more details.
Pustiw
Melbourne, Australia
4430

Sadly under achieves its potential

Despite our problems finding the hotel – Google has the wrong GPS coordinates so beware – Sol hotel is a potentially great modern hotel with a gorgeous setting. Sadly they pretty much under achieve their potential in every category. The views are great but the balcony is so small you couldn't fit more than one person on it. The bathrooms are nicely appointed but the towels were so harsh they could stand up on their own. We had half board as part of a walking tour and the fixed menu for dinner was pretty good but we were treated like second-class citizens by all concerned - apparently half borders are not as profitable. This hotel has great potential and should be on the market for acquisition..More 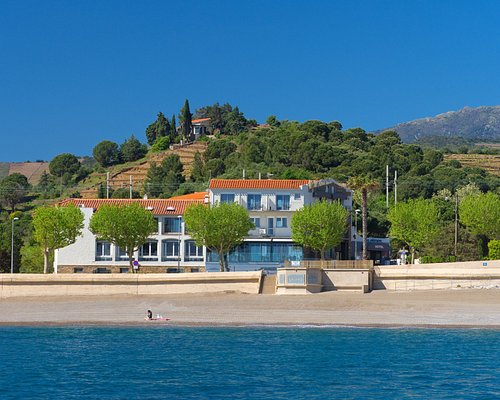 The hotel is situated in the upper part of the village at the coast in France. Lovely, however, wouldn´t recommend to stay there longer than couple of nights. WiFi was perfect, the bed and bathroom clean, however, the nearby restaurant as the part of the hotel rather limited in the offer, anyway, we had a great selection of seafood and menu in their tasting menu offer for that particular night.

This review is the subjective opinion of a Tripadvisor member and not of TripAdvisor LLC.
TravelPad
London, United Kingdom
169164
Reviewed 14 October 2013
Very average with a bad attitude

We stayed here as part of a week-long walking holiday with High Point Holidays going from Collioure in France and finishing at Cadaeques in Spain. The hotel is a little off the main beach area and round a bend that overlooks another bay about a 5/7 minute walkaway up a hill.

The hotel looks quite modern with rooms and balconies facing towards the sea. The staff can’t speak much English and we just had enough to explain to them that we were vegetarian (we were also eating here as part of the half board arrangement that goes with the walking holiday). If I’m honest, they could have been a little more welcoming and less abrupt.

The room itself was OK with a small balcony that gave us a view of the sea. There was also a TV in the room and a decent Wi-Fi connection. Both the room and the bathroom were clean and good enough for our single night that we were stopping for.

As this was a half board arrangement, we were eating in the restaurant that was attached to this family run business. This is where we started to encounter problems. We went down to the restaurant early to see whether they could do something vegetarian for us and this proved more difficult than we thought. We simply asked for a meal that didn’t include fish or meat and we didn’t want another omelette.

This being France and this being quite a decent restaurant, we didn’t think the chef would have a problem with this, but we were wrong. We spoke to the whole family trying to make ourselves clear about what we didn’t want including the chef himself but this didn’t matter – I guess there just wasn’t the will there to help us. We even suggested doing some pasta with some sort of tomato sauce and the result was, to say the least, very, very poor (see image below).

After we were brought the pile of pasta with some ordinary tomatoes just chopped and thrown on top, we asked for some cheese (in French), this was met with a straightforward ‘No’. I think it was the incredulous looks on our faces that made them change their minds and bring a few small slices back from the kitchen.

We didn’t finish this poor excuse for a meal and skipped the desert as well. Even when we tried to leave and pay for the wine that we had, our attempts at attracting the staff for the bill were ignored so we left.

At breakfast the next day, things were a little frosty. So we partook in the coffee, juice and cereals and then got our bags and left feeling quite disappointed with the attitude of the staff.

I would say that if you are in the area, I would try elsewhere first before coming here. If you are a vegetarian, then don’t eat in the restaurant, they really are clueless to your concerns.

This review is the subjective opinion of a Tripadvisor member and not of TripAdvisor LLC.
Pitball2012
Kingsclere, United Kingdom
10536
Reviewed 1 August 2013
stunning views

good hotel, high above the town, but good access down steps to harbour. Tougher on way back up! Hotel room is very clean, maybe a little tired in places, but they are working on it. We stay there when visiting family in the town.

This review is the subjective opinion of a Tripadvisor member and not of TripAdvisor LLC.
Pima41
Arizona
9621
Reviewed 30 July 2013
Not great

We only stayed one night and did not spend a lot time in the room which worked out good. Per other suggestions we booked a room with a view which was on the second floor. We arrived early afternoon and the hallway and staircase was absolutely too dark to find your way. We finally found light switches as we walked up to our room. Overall room is in desperate need of an update. The bathroom sink had no counter so no place to put toiletries. Toilet sat so close to bidet that when sitting my knees hit it (I'm 5'3"). Towel was so rough that when I first used it I thought I had accidentally grabbed the floor mat. The view was great and we weren't bothered by road noise. For one night it is ok but the price was a bit high for such a dated facility,

Room tip: Ask for a room with a view.
Ask Pima41 about Sol Hotel
Thank Pima41

This review is the subjective opinion of a Tripadvisor member and not of TripAdvisor LLC.
kurtzzzz
Brussels, Belgium
912
Reviewed 30 July 2013
Family hotels should not be compared to luxury hotels...

My girlfriend and I were a bit astonished by the many negative reviews of this modest but clean family hotel. True, the rooms lack a bit of human technology (there are exactly zero electricity sockets in the bathroom) but the air conditioning was among the best I have ever seen (and not heard) in a hotel room. The in other reviews often cited sound pollution from the road in front of the hotel was completely absent, thanks to the double windows. The staff was friendly, the breakfast ok (albeit not really inspired). Price/quality of this hotel is excellent, especially given the outrageous rates of other hotels in the area.