Lots of food for a reasonable price at... - Askania Hotel

FindHotel
Trip.com
ZenHotels.com
Prices are the average nightly price provided by our partners and may not include all taxes and fees. Taxes and fees that are shown are estimates only. Please see our partners for more details.
U3678PRrichardb
12951

Lots of food for a reasonable price at this hotel resturant.

I was hungry so we decided on the Askania hotel restaurant which has an all you can eat rib special every Wednesday night. The pork rib meat was of good quality but I needed extra sauce which they brought to kick it up a notch. I also ordered and extra salad. My wife had the Sulze plate which she seem to enjoy. Our meal including drinks was only 29e which I thought was reasonable for good quality, but not fancy food.More

Show less
Room tip: Try the hotel restaurant if you are hungry
Trip type: Travelled as a couple

Cheers and we hope to see you again.

Report response as inappropriateThank you. We appreciate your input.
This response is the subjective opinion of the management representative and not of TripAdvisor LLC
See all 61 reviews
Nearby Hotels 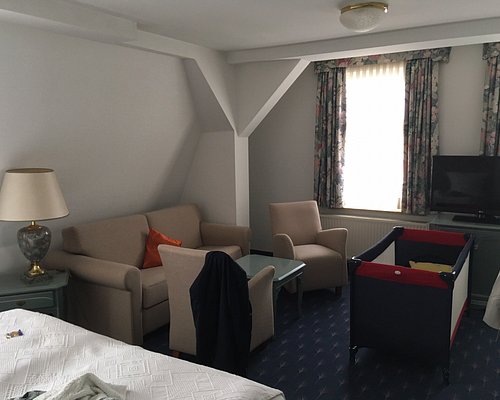 The Askania is a very traditional hotel of the region with a bar/restaurant open to the public on the ground floor. The rooms are quite generously sized and the breakfasts are probably better than the norm. The outstanding feature of the hotel is the mini bar. It was well stocked (when I arrived) and very reasobly priced. 1.50 Euros for a beer is good I think. The staff are very friendly.

This review is the subjective opinion of a Tripadvisor member and not of TripAdvisor LLC.
Michael T
Formby, United Kingdom
466261
Reviewed 24 March 2016 via mobile
Germanic charm

Stayed here for 3 nights. Clean comfortable room, excellent breakfasts, friendly staff and a nice bar. Distinctive Germanic style. No plastic in sight. What's not to like. Would definitely recommend for anyone who likes their accommodation to reflect the area in which they are staying.

This review is the subjective opinion of a Tripadvisor member and not of TripAdvisor LLC.
31Extensivetraveller
Brisbane, Australia
15263
Reviewed 18 May 2015
Super-clean Rooms and Excellent Management

This friendly little jewel of a hotel provides excellent value and friendly bright rooms, The owner and manager of their excellent Restaurant which we frequented several times, seemed to be everywhere all the time when help was needed and simply could not do enough to keep his visitors happy. I also must give a mention to the excellent and friendly cleaning staff and the excellent service in the breakfast room. The hotel is centrally located and I would stay there very happily again.

This review is the subjective opinion of a Tripadvisor member and not of TripAdvisor LLC.
Michela V
Helsingoer, Denmark
2810
Reviewed 16 January 2015
Really good bargain

I visited Askania hotel in December 2014 using a DayDream voucher, spending three nights.
The hotel is very clean, not particularly modern but it doesn't matter.
At the reception they speak only German and luckily my boyfriend can speak German, otherwise that would have been a problem.
The room was spacious enough, very clean, as well as the bathroom.
Very quiet room. The mattress was a bit hard but that's depends on people habits I guess.
Due to the vouchers rules, we had to have three dinners at the hotel restaurant. The service was really good, as well as the food, especially the meat.
Breakfast was also good, with a wide variety of cheese, cured meats etc (not for Italians though, but it was not a problem).
We really had a great deal.

This review is the subjective opinion of a Tripadvisor member and not of TripAdvisor LLC.
jorgem323
Muzquiz, Mexico
7931
Reviewed 21 April 2012
Nice breakfast

The restaurant is located in a very nice part of town (if you come for business is great because is easily accesible and very close to City Center). Close to city center, the restaurant is very good (not a lot of variety as one can expect for a hotel of this size).

The breakfast is also above good. The previous restaurants where I have been in Germany on business trips would have one third of what this has. So, all in all is a good hotel for the price.

The parking lot is a bit crowded (as expected) and the staff at reception do not speak English very well.