US$126
US$109
View deal
Expedia
ZenHotels.comUS$126
Trip.com
View all 7 deals
Prices are the average nightly price provided by our partners and may not include all taxes and fees. Taxes and fees that are shown are estimates only. Please see our partners for more details.
thepowells08
Florida
315

We chose La Quinta Inn Macon West mainly because it's dog friendly & on out route half way between North Carolina and Florida. We had an end room on the first floor fir one night. It was perfect for walking our dog & getting in & out quickly. Everything seemed to work properly. We didn't use some of the amenities, but were satisfied with what we did use.More

Show less
Room tip: If you have a dog, room 115 on the first floor is closest to the grassy dog walk area.
Trip type: Travelled with family

I am so pleased to hear you enjoyed your stay with us! We look forward to seeing you, and your pup(s), again in the future!

Report response as inappropriateThank you. We appreciate your input.
This response is the subjective opinion of the management representative and not of TripAdvisor LLC
See all 855 reviews
Nearby Hotels 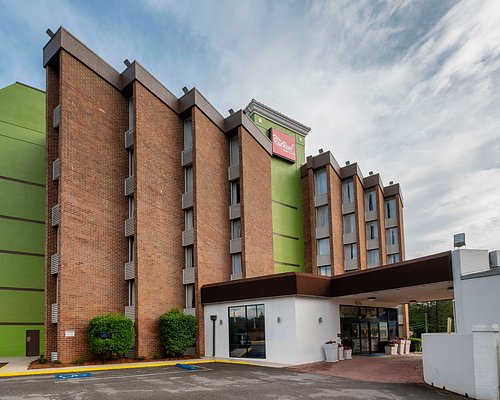 Hotels.com
View deal
Booking.com
ZenHotels.com
US$82
Expedia
View all 8 deals from US$82
333 reviews 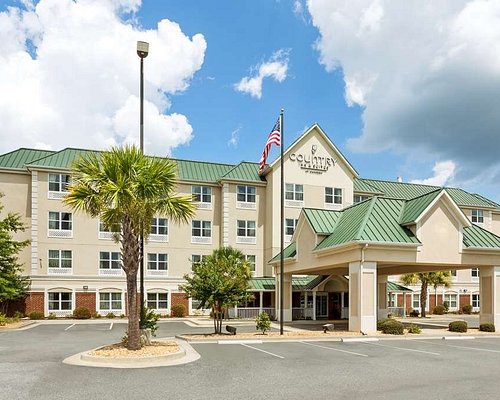 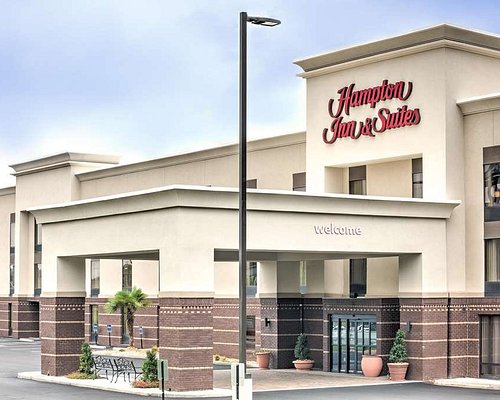 Hotels.com
View deal
Booking.com
ZenHotels.com
US$137
Expedia
View all 7 deals from US$137
892 reviews
13.4 km from La Quinta Inn & Suites by Wyndham Macon West
We compared the lowest prices from 7 websites
Sponsored
Courtyard by Marriott Macon
US$104

Hotel is in a decent location, right off the highway. Quite a few fast food options near by, a Kroger about a mile away. Not necessarily a pretty area, but I felt safe as a mom alone with two kids. Everything felt clean, the staff was friendly. About ten minutes to Mercer University and downtown Macon. Very dog friendly! I think we were the only people in the hotel who didn’t have a dog with us, but it didn’t cause any issues for us. Only negative was the breakfast. I give them credit for offering a hot breakfast in Covid times, but it was just really not good. Stick to the bagels and fruit!

Thank you so much for taking the time to tell us about your stay. I am so happy to hear that you enjoyed your stay with us. We appreciate you taking the time to give us suggestions on the breakfast. We will take your comments into consideration as we strive to improve our customer experience. We look forward to seeing you again in the future.

Report response as inappropriateThank you. We appreciate your input.
This response is the subjective opinion of the management representative and not of TripAdvisor LLC
jhorne465641
1
Reviewed 17 July 2021
Bad check in experience

Well I feel like I got screwed having to stay another night due to booking through a third party booking service which the guy working said that I should try to do to save some money. I have never used anything like that so I was kind of hesitant but he told me it was easy so I went ahead and did it. Well apparently he didn't know anything about these sites except to save you money. So I went to booking.com and keep in mind this is around 12:45 in the morning maybe 1:00 in at the time i did this. I found a room a few dollars cheaper was happy so I clicked on reserve your room now for today and it reserved it for today... Today to them was at 3:00 that afternoon not one in the morning when I was trying to go to bed so after that happened I explained to the guy what happened and he didn't know what to do so i said just cancel that and change it for today but he didn't know how to do that. I got all the app and I finally found where you contact customer service set on hold for 30 45 minutes waiting on somebody so by now it's 2:45 in the morning and I want to go to bed so I finally just give up and go ahead and pay for the room from 5 hours or 6 hours full price and had to stay another night since i couldn't get anyone on the phone that night and then I found it on the app where it said cancellation fee would be 119.00 give or take a few dollars.Polite guy but to sum it up he was no help and resolving the problem that he's somewhat helped create. I was sadly disappointed at this whole situation and the cost of me having to spend extra money. He knew what I wanted the room for he knew that it was a mistake he could have canceled that somehow even if he had to call his manager or boss and then I wouldn't have had to spend an extra $134 for no reason.. I copied and pasted this review and saved it because I'm going to send it to corporate every review place online booking.com as well everywhere I can place it I'm going to place it unless I get refunded or something oh by the way the breakfast was good!!
Thank you, and hope you all have a good day!!

Review collected in partnership with this hotel
This business uses tools provided by Tripadvisor (or one of its official Review Collection Partners) to encourage and collect guest reviews, including this one.
Ask jhorne465641 about La Quinta Inn & Suites by Wyndham Macon West
Thank jhorne465641

Thank you for taking the time to tell us about your experience at La Quinta Inn & Suites by Wyndham Macon West. I am sorry that your experience did not meet your expectations; please allow me to express my sincerest apologies. Your feedback is very important to us, and I am sorry to hear that you were not satisfied with your stay. It appears that you booked room through one of the online vendors. When booking that way, please make sure you are selecting the correct date and location. After midnight, the online sites usually default to the next day. Here at La Quinta Inns & Suites, we continuously strive to meet your needs and expectations. We appreciate the time you took to share your concerns, and it is our hope that you will give us the opportunity to better serve you in the future.

Report response as inappropriateThank you. We appreciate your input.
This response is the subjective opinion of the management representative and not of TripAdvisor LLC
jhender85
Ann Arbor, Michigan
1131
Reviewed 6 July 2021 via mobile
Not a recommended place for anything more than a quick 1 night stop, but could have been worse

I'll be honest: we were eager to get the heck out of here. This hotel wasn't terrible, but it wasn't good either.

The first notable thing that negatively impacted the experience was the area. I scoffed at other reviews stating the area wasn't the nicest, but they were right. It's not that I ever felt unsafe, it was that it wasn't ideal for travelers. From the surrounding estaurants to even the nearby gas station, they were rundown, dirty and subpar compared to what you'd expect from those businesses in other areas. Just in general gave an uncomfortable vibe. Another tip off that despite the proximity to the highway and a decent sized city was there were no coffee place in any reasonable distance to the hotel. That was a red flag I missed.

As for what was actually in the hotel itself's control, the place was mediocre. Check-in staff was pleasant, friendly and conversational at least, but the rooms left much to be wanting. We stayed in a king bed suite. The mattress was awfully uncomfortable, furnishings were outdated, there were stains and signs of half-effort room cleaning. For the sofa bed, only a flat sheet was provided (in the drawer and not sealed). We asked housekeeping, and they advised us to look around the room more. Then when we called the front desk, they told us we'd have to come down to pick up the pillows and blankets (probably more due to being short-staffed than being rude, but still not appreciated they didn't offer to bring them up to us). As for entertainment, the tvs were also subpar (small, awkwardly far away from the tv, and the remotes barely worked) and the pool was closed.

To top it all off, the smell in the room and most of the hotel was off. It was a wet, musty smell throughout. It's quite clear this hotel is very pet friendly, and as we didn't have pets with us on this trip, that isn't necessarily a good thing in the context of this review.

We can't comment on the breakfast because we were so eager to leave that we hit the road first thing in the morning. Again, it wasn't terrible, but it didn't seem to at all match it's high ranking compared to other Macon area hotels, and I will absolutely be avoiding it if I'm ever nearby the area again.

This review is the subjective opinion of a Tripadvisor member and not of TripAdvisor LLC.
luvtravel86
Crown Point, Indiana
9218
Reviewed 22 June 2021 via mobile
Great hotel off of highway

My family and I stayed here on the way to Florida, the rooms were very clean with comfortable beds. The hot breakfast was good with waffles, pancakes, and biscuits with gravey. The staff was friendly when we checked in the hotel. It was a great place to stop over night.

Report response as inappropriateThank you. We appreciate your input.
This response is the subjective opinion of the management representative and not of TripAdvisor LLC
HughS253
Charlotte, North Carolina
235136
Reviewed 19 June 2021 via mobile
Halfway stop between the Carolinas and Florida?

If you’re traveling through Macon, and the price suits your budget, this is a good stop. The rooms are clean, front desk friendly, and breakfast buffet adequate. There’s other chain eateries real close. And by the way, if you’re traveling from the Florida Gulf Coast up towards the Carolinas, it’s real pretty via the good state roads of South Georgia. Next time through I’m going to plan a stop in Plains (President Jimmy Carter’s hometown!) and the historical site (Civil War POW camp) in Andersonville. So refreshing to get off the interstates.

I am so pleased to hear that you enjoyed your stay with us. We look forward to seeing you again in the future!

Report response as inappropriateThank you. We appreciate your input.
This response is the subjective opinion of the management representative and not of TripAdvisor LLC
View more reviews
PreviousNext
123…