Kimpton Nine Zero Hotel
2 people are viewing this hotel
Lock in the lowest price from these sites
US$197
US$168
Free cancellation until 29/04/21
Reserve now, pay at stay
View deal
Hotels.comUS$168
Trip.comUS$197
ExpediaUS$168
TripadvisorUS$168
Prices are the average nightly price provided by our partners and may not include all taxes and fees. Taxes and fees that are shown are estimates only. Please see our partners for more details.
Pablin_96
11

Me and my girlfriend stayed at this hotel for 3 nights and it was amazing. The hotel is beautiful, extremely clean and the staff was extremely attentive and awesome, specially Kalim at the front desk.More

Thanks so much for the kind words, especially about Karim!

Report response as inappropriateThank you. We appreciate your input.
This response is the subjective opinion of the management representative and not of TripAdvisor LLC
See all 3,316 reviews
Nearby Hotels 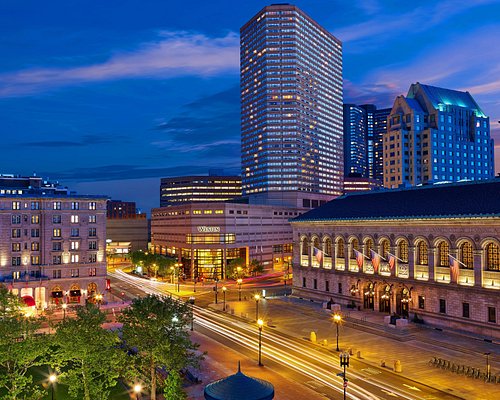 Taking safety measures
We compared the lowest prices from 4 websites

Taking safety measures
We compared the lowest prices from 5 websites
YOTEL Boston
US$152
Booking.com
View deal
Hotels.com
US$152
Trip.com
US$115
Expedia
US$152
View all 5 deals from US$115
863 reviews
1.3 km from Kimpton Nine Zero Hotel

Taking safety measures
We compared the lowest prices from 4 websites
The Godfrey Hotel Boston
US$171
US$142
Booking.com
View deal
Hotels.com
US$142
Official Hotel
US$142
Trip.com
US$171
View all 8 deals from US$142
5,969 reviews
0.3 km from Kimpton Nine Zero Hotel

Taking safety measures
We compared the lowest prices from 4 websites
Hilton Boston Back Bay
US$153
US$149
Booking.com
View deal
Free cancellation
Reserve now, pay at stay
Hotels.com
US$149
Trip.com
US$153
Expedia
US$149
View all 5 deals from US$149
3,495 reviews
2.3 km from Kimpton Nine Zero Hotel

Taking safety measures
We compared the lowest prices from 6 websites
The Revolution Hotel
US$109
Booking.com
View deal
Free cancellation
Reserve now, pay at stay
Hotels.com
US$104
Trip.com
US$137
Tripadvisor
US$104
View all 6 deals from US$104
408 reviews
1.5 km from Kimpton Nine Zero Hotel

Taking safety measures
We compared the lowest prices from 6 websites
Hyatt Regency Boston
US$188
US$175
Booking.com
View deal
Free cancellation
Hotels.com
US$175
Trip.com
US$188
Expedia
US$175
View all 7 deals from US$175
5,174 reviews
0.4 km from Kimpton Nine Zero Hotel

I stayed for one night at the Nine Zero (and was bowled over by the staff. The Keurig machine can be sent to the room but when Phil heard that I drink tea all day and night when working, he went out of his way to get me a stash of English Breakfast tea bags. There's the lovely Yary who checked me in and was available to help answer any questions. Addy prepared the tea tray with the kettle and paraphenalia and brought it to my room. Jorge was always very welcoming at the door when I came back.

The building itself is charming with clusters of rooms in nooks and corners. Vintage picture adorn the wall with matching style furniture. The room was spacious, the bed was firm the way I like it, and the headrest was comfortable to lean against with good reading light over it. Good volume of hot water in the shower.

Nice restaurants, a food court, and fast food within 2-8 mins walk. Check out Bonjour and say hi to owner Driss - a charming French cafe with classics like Egg Benedict, Avocado Toast, and Shaksuka. Offers a 10% discount for hotel guests. Mast serving Italian food, is 2 mins round the corner and they offer 15% discount to guests. Chinatown is a couple of blocks away. Lots of shops 3 mins away on Washington St, as are the T stations Downtown Crossing and Park Street which will literally get you to any part of Boston.

Thank you so much for a delightful stay.

Thanks so much for the awesome review, we love having you! Can't wait for you to return!

Report response as inappropriateThank you. We appreciate your input.
This response is the subjective opinion of the management representative and not of TripAdvisor LLC
LetteringByLiz
11
Reviewed 19 January 2021 via mobile
Kimpton Nine Zero is an A+ experience...highly recommend!! BOSTON’S BEST

I enjoyed a 5-star experience with the amazing staff & top notch accomodations at the beautiful Nine Zero Hotel. My stay was an unexpectedly extended one & the management (Phil, Joseph) front desk staff (Yary, Leon, Liz) & housekeeping professionals (Addy was terrific) really went out of their way to make me & my pet (see photo attached of David Ortiz the Cat enjoying the gorgeous view from Rm 1002) feel like we were at home during a challenging time. The stunning room, lovely common areas, most convenient location in the city - all wonderful.

Major bonus: PET FRIENDLY at no extra fee (as with all Kimptons).

Wow, thank you so much for the amazing feedback and team member shout outs! We will be celebrating for sure...thanks for choosing to stay with us during these crazy times!

Report response as inappropriateThank you. We appreciate your input.
This response is the subjective opinion of the management representative and not of TripAdvisor LLC
llleche
11
Reviewed 19 January 2021
10/10 would book again!

From the valet to the front desk, everyone was as pleasant as can be. The representatives at the front desk who checked us in AND checked in on us throughout our stay (via text) were so kind and helpful. Due to the pandemic they understandably don’t have an operating restaurant or bar but they offered a wine “happy hour” where you could grab a complimentary glass of wine in the lobby to enjoy in your room, and coffee in the mornings. The room was clean and enjoyable, great functioning and adjustable AC, TV, phone/in-room tablet, etc.
Thank you to the awesome staff for making our last minute stay such an enjoyable one - we didn’t want to leave!

Hard to top that, thank you so much for the amazing feedback! I appreciate the kind words and for you choosing to stay with us!

Report response as inappropriateThank you. We appreciate your input.
This response is the subjective opinion of the management representative and not of TripAdvisor LLC
Edgarvzz
11
Reviewed 6 January 2021
Subpar Stay

My stay was subpar. I booked a Hub Suite, which every website said would accommodate 4, and I specifically indicated that we would be 4 during the booking process. We arrived past 1am on our first day but actually started getting ready for bed at around 3:30am. At that time, we discovered that the room was only equipped with 1 king bed; there was no sofa bed. We had to call the front desk and request 2 rollaway beds, and it took about 45 minutes for both beds to be delivered. We ended up going to sleep past 4:30am. We later found out that the none of the Hub Suites have a sofa bed! That being the case, it should not be advertised that those rooms accommodate 4 guests because they do not, but at the very least, the 2 rollaway beds should have already been in the room prepared for us. The following morning, we spoke to a lady manager or assistant manager (don’t remember her name) who said she could only credit $100 for our troubles. She said that the rollaway beds weren’t already in the room because “sometimes, people indicate that it’s more than 2 people by mistake”. I told her she should not have made that assumption because in our case, we were actually 4! I feel like the credit should have been more since we did not get what we had booked; a room that comfortably accommodates 4. We booked a Hub Suite because it provided a nice living room space, where we planned to celebrate New Year’s Eve. But now, we had 2 rollaway beds in the middle of that space, so it was as if we had booked a regular room.

The rollaway beds were TERRIBLE. We had to have them replaced toward the end of our stay. My kids were literally sleeping on springs with a thin covering on top. They made so much noise and were so uncomfortable that you would think the beds were first bought in 1960 and never replaced. Not fair, especially since we stayed for 6 nights!

The lady manager that gave us the $100 credit had also offered to cover the valet parking expense. We did not have a car upon arrival but ended up renting one for a day. Upon checkout, we saw that 2 nights of valet parking (at $55 a night) had been charged to our room. When we informed the front desk attendant that the lady manager had offered to cover the valet cost, he said he didn’t see any notes about it. Instead of inquiring further and trying to help us, he kept interrupting me and wouldn’t let me finish my sentences. He was very rude. I had to stop him in his tracks and tell him to not interrupt me anymore. That’s when he finally called Joseph Farrenkopf (the manager on-site) over. Joseph was very kind and understanding, and was able to take care of the valet fees for us. I actually recall seeing Joseph throughout our stay and he was very nice and attentive. He would even serve wine during happy hour.

To sum it up, my stay was subpar because I did not get what I paid for, and with the exception of Joseph, the cleaning staff and the valet staff, the rest of the staff I interacted with was either not very knowledgeable about the hotel or was not nice, welcoming, or understanding.

P.S. We just arrived back home and as we were walking to get our luggage, my six year old tells me: “I’m glad we are back home”. Mind you, he’s never said that after a trip. He always wants to prolong the vacation. I asked him “why papi?”. He said “I didn’t want to sleep in the uncomfortable bed (the rollaway) anymore. :’(

I'm so sorry that you experienced this during your stay. It's definitely not what we want and something that I will address with the team. Thanks for the feedback on the rollaways, we hadn't heard that before. I'll do an audit and see which ones need replacing, but I really appreciate you calling it out.

Thanks again and I'm so sorry for your experience.

Report response as inappropriateThank you. We appreciate your input.
This response is the subjective opinion of the management representative and not of TripAdvisor LLC
dimp514
1
Reviewed 1 January 2021 via mobile
New Years Disaster

The room looks amazing and the bathroom is also great. However, there was mysterious knocking on our door and nobody was interested in hearing it at the front desk. Their whole front desk staff seems completely uninterested in ensuring a great stay, which is problematic. To make this all worse, the whole elevator and 7th floor reeked of marijuana and completely ruined our stay.

I'm so sorry that other guests caused a challenging experience for you and that you felt the team was uninterested. That is not our intention by any means and I will address with the team here. Thanks for bringing these issues to my attention.

Report response as inappropriateThank you. We appreciate your input.
This response is the subjective opinion of the management representative and not of TripAdvisor LLC
View more reviews
PreviousNext
1234…553