Stayed in two houses on Mid April for a week, both quaint and filled all my needs, beautiful architecture, views and wildlife. Owner Cynta is the main reason as she has created a wonderland experience and her hospitality is off the charts. Everything is well thought out and provided for. I used her property as my jumping off point for hiking and birding Big Bend N.P. Perfect location and the town of Terlingua is a must see. A lot of fun things around. Much better stay here than in motels in Big Bend.

Room tip: All rooms are great
See all 56 reviews
Nearby Hotels 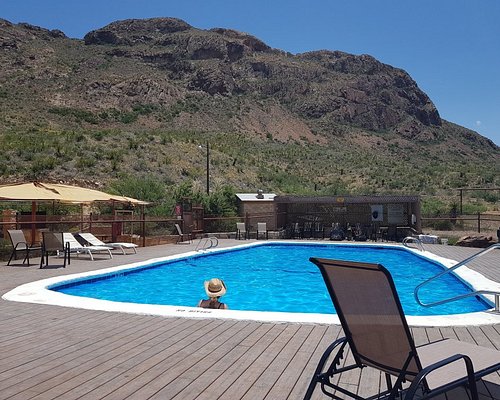 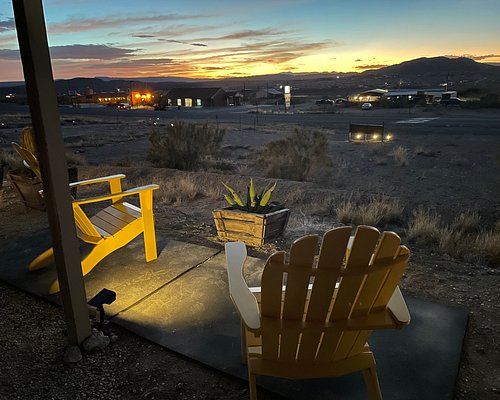 Terlingua Nights Cabins
US$180
Tripadvisor
View deal
Pay up to 12X
Hotels.com
Expedia
Trip.com
View all 5 deals from US$180
7 reviews
1.4 km from Villa Terlingua
We compared the lowest prices from 5 websites 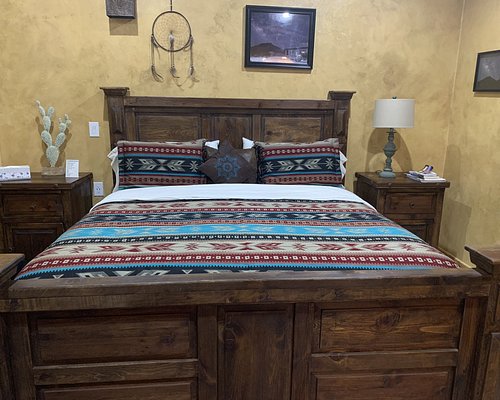 We have traveled to many amazing destinations and stayed at some wonderful places, but this is a one-of-a-kind. My husband and I loved our time at Big Bend NP and the Guest House. It was uniquely designed, eclectic, had the most incredible views, and provided the opportunity for us to disconnect from the craziness of the outside world, reconnect with one another, and find an inner peace. Magical. Cynta has created a place that is a blessing to all those who pass through. After three days celebrating our 30th wedding anniversary in May, we are hooked. A return trip is already planned for January.

This review is the subjective opinion of a Tripadvisor member and not of TripAdvisor LLC.
HJfromATX
1
Reviewed 15 May 2019
Fabulous R&R Week for Working Women!

Eight of us hard-working Texas women, (ages 36 thru 68!) spent a week in Terlingua throughly enthralled with the Chihuahaun Desert climate and scenery as viewed from the Villa Terlingua, our "home away from home". We arranged to have both the Main House and the Guest House. Each place met our expectations and then some! Both were perfectly lovely. Comfortable & convenient to all we had come to do: Walking & Hiking, Visiting & Touring the Big Bend Nat'l Park, Attending Live Music at the Starlight, etc,etc. We especially loved preparing meals together in the well-provisioned kitchens. And the bathrooms were divine with clawfoot tubs and showers...indoor and outdoor! I must add: the Beds were All Very Compfortable!
The owner/concierge,Cynta certainly made us feel welcome by attending to all our needs promptly and offering us insider-type info about the area. From my bed in the Guest House, I was awakened by Spectacular Sunrises over the mountains. (My choice: I could've closed the curtains!) The Wrap Around Porch and Each of the Patios made Outside Living easy and enticing! (Perhaps we were a little too exhuberant outside ...chatting and giggling. We were politely reprimanded by the owner. For any trouble we may have caused her or others, we were and are deeply apologetic.) If you desire a place to stay while you explore this amazing desert area, Villa Terlingua surely is the best! All 8 of us highly recommend Villa Terlingua and do plan on returning with our families & other friends.

Room tip: Renting two? Maybe Main & Blue Houses, being shortest distance from one another and across the driveway with shared parking.
Ask HJfromATX about Villa Terlingua
Thank HJfromATX

This review is the subjective opinion of a Tripadvisor member and not of TripAdvisor LLC.
Nancy S
7
Reviewed 14 May 2019 via mobile
Magical!

We stayed in this beautiful place while visiting Big Bend National Park. It was amazing. One night we slept outside in the bed on the patio. The sky is so black and clear that we saw stars up close. We even saw the Milky Way; a first for us. The hammock was the perfect spot for a nap. The sunrise from the porch was breathtaking. Wow!!

Thank you! I'm so glad you love Big Bend.
Cynta

Report response as inappropriateThank you. We appreciate your input.
This response is the subjective opinion of the management representative and not of TripAdvisor LLC
Ron K
32
Reviewed 3 May 2019
Great if you are looking for a party propery

We stayed in the Blue House, and the first two days were fine, except for: the completely random, and uncontrollable, temperature of the shower, the barely adequate air conditioning, and the very dim living/kitchen area lighting. Then a large group (I dubbed them the hyena pack) moved into the other house on the property, and partied continuously out on their porch. Their porch was less than 50 feet from our patio and bedroom window, so we had no peace at our place at all, and we left a day earlier than originally planned as a result. Cynta, the proprietor, is very nice, but completely failed us in not enforcing her rule of no parties.

Ron, Oh my gosh, I am sorry you had such a bad experience. So much of this could have been remedied, if you had communicated with me. I came by to talk to you several times and my texts went unanswered. No one else has complained about these things so I had no idea there was a problem. You initially had a problem turning the air conditioner on, but once I showed you how, was there still a problem? If I had known the lighting was bad, I would have gotten you stronger light bulbs. The water heater is a tankless, propane hot water heater, slightly different from the regular variety but it works perfectly and I thought you knew you were in an off-grid, hand built home.
As for the partiers, they were loud. Absolutely, and I came out three times in three nights to ask them to quiet down and they did. They were contrite. When I offered to move you to a quieter house and foot the bill myself, you never answered back. That is why I thought it was fair to return your final night as you had left early. Also, Ron, I would never scream at my guests. I asked them to be quiet and they were.
I regret these things happened during your stay.
Cynta

Report response as inappropriateThank you. We appreciate your input.
This response is the subjective opinion of the management representative and not of TripAdvisor LLC
MarlaI11
195
Reviewed 22 February 2019
Wonderful, relaxing stay!

My friend and I stayed at Villa Terlingua again this year. Wonderful as always. So great to see our hostess, Cynta and host, Baxter. Was made to feel at home. Very close to the park so we could hike during the day and come back 'home' to relax each evening. Cynta goes above and beyond to give you tidbits of information to help in your tours and stay.