US$124
View deal
ExpediaUS$124
Agoda.comUS$124
FindHotel
View all 9 deals
Prices are the average nightly price provided by our partners and may not include all taxes and fees. Taxes and fees that are shown are estimates only. Please see our partners for more details.
PaulFradin
Beacon, New York
10238

I’m a Diamond member and have stayed at all brands of Hilton’s all over the world ( from Conrad’s to Hampton Inns). This is one of the nicest stays I have ever had. Why?

1. Lovely restored historic hotel; beautiful and comfy lobby.
2. Restaurant was excellent (steak was amazing). Breakfast was also delicious.
3. The hotel was spotless
4. The rooms are large
5. The front desk staff was very friendly
6. They have a Tesla charger and a non Tesla charger

The Hotel Manager and the employees have a well run, beautiful hotelMore

Well, thank you Paul. You summed it up quite well and we appreciate it. It charges us up to see comments like this so thank you! I will make sure and share with our amazing team that made your comments possible.

Report response as inappropriateThank you. We appreciate your input.
This response is the subjective opinion of the management representative and not of TripAdvisor LLC
See all 2,073 reviews
Nearby Hotels 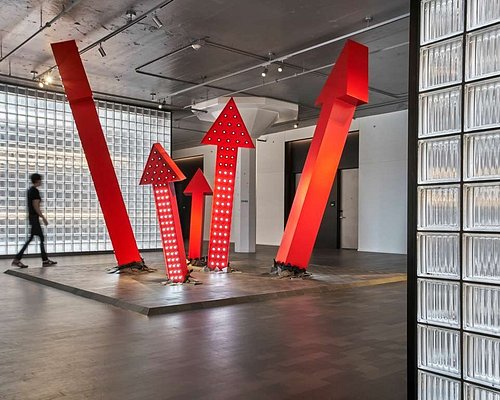 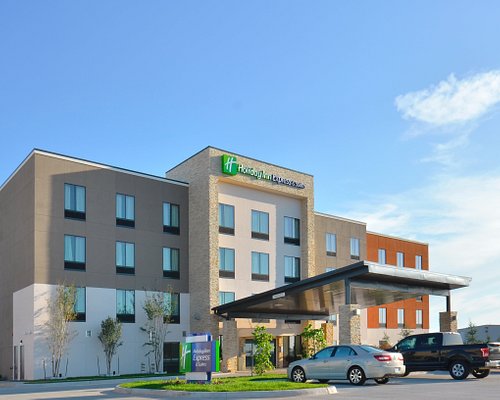 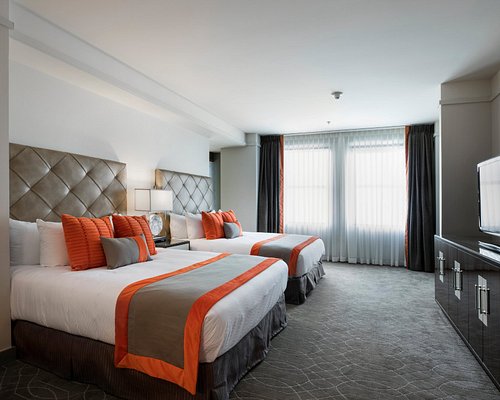 Hotels.com
View deal
Free cancellation
Pay up to 12X
Booking.com
US$158
Trip.com
US$155
FindHotel
US$158
View all 9 deals from US$155
1,293 reviews
0.3 km from The Skirvin Hilton Oklahoma City
We compared the lowest prices from 9 websites
21c Museum Hotel Oklahoma City
US$153

Hotels.com
View deal
Free cancellation
Reserve now, pay at stay
Booking.com
US$153
FindHotel
US$111
Trip.com
US$113
View all 8 deals from US$111
1,148 reviews
1.3 km from The Skirvin Hilton Oklahoma City

Hotels.com
View deal
Free cancellation
Reserve now, pay at stay
Booking.com
US$87
FindHotel
US$79
Trip.com
US$85
View all 8 deals from US$79
336 reviews
8.6 km from The Skirvin Hilton Oklahoma City
We compared the lowest prices from 8 websites
Breakfast included
Embassy Suites by Hilton Oklahoma City Northwest
US$127

Hotels.com
View deal
Free cancellation
Pay up to 12X
Booking.com
ZenHotels.com
US$89
Trip.com
US$90
View all 8 deals from US$89
39 reviews
8.3 km from The Skirvin Hilton Oklahoma City
We compared the lowest prices from 8 websites
Breakfast included
Clarion Inn & Suites Oklahoma City Near Bricktown

This is a grand hotel. Beautiful wood-paneled lobby. Elegant meeting rooms and ballrooms on top floor. Near Amtrak station and less than $20 Uber to airport. Location near several downtown streetcar stops with great access to city attractions.

Housekeeping still not back to daily for rooms, but that wasn't an issue for me.

Major road construction on streets near the hotel. (There were no noise issues in the room, though.) Uber had a tough time getting to the hotel. Doormen were very helpful. If you use Uber, ask them to give you info to feed into the app re how to manage traffic and access.

Only issue I had was dinner availability. I was assured by front desk that Park Avenue Grill would be open for dinner Monday night. That was incorrect, though I did have a very nice meal at the casual Red Piano Bar. Would have made alternate plans had I know that for dinner, though.

(Grill was open for breakfast, and the eggs and bacon were great!)

Nice feature: check the historical display of photos and mementos in the hall just off the main lobby. Check out some of the stars and notables who had stayed there.

I really appreciate your comments Smudgecats. I'm sorry about the miscommunication on the restaurant. I'll make sure the whole team is singing from the same sheet of music. Hope to have you back one of these days.

Report response as inappropriateThank you. We appreciate your input.
This response is the subjective opinion of the management representative and not of TripAdvisor LLC
K P
Dallas, Texas
144
Reviewed 13 June 2021
No housekeeping

I was stunned to find that there is no housekeeping - not even a refresh of bathroom things like soap, shampoo, and toilet tissue. We had to ask for every little thing - all of those, plus I had to call for a hairdryer, and we had to request coffee packets and cups for the second day of our stay. When we arrived in the middle of the day on Friday, there was a dental floss on the floor in the hallway outside our room. On Saturday night at 9:30, it’s still there. There have been the same two dirty room service glasses on a cabinet in the hall for 2 days. I am not impressed at all - other than that the people at the front desk are nice.

KP, thank you for taking the time to share your feedback here and via Yelp. I'm very sorry we disappointed you. I know it seems strange when things are beginning to lighten up that Hiltons are still in COVID request-only housekeeping service mode, but there are many who still prefer we not enter their room unless requested. I truly apologize this was not communicated fully to you via reservation confirmation, on our website, via signage on each floor, or that the arrival agent did not properly explain this to you. Please know I will address this with our Front Desk Team as well as the hallway issues you noted right away. For those that prefer it we absolutely offer full daily housekeeping services. I really hope you will give us another chance one day to change your mind about our property. We would greatly appreciate the opportunity to make this right for you. Thank you.

Report response as inappropriateThank you. We appreciate your input.
This response is the subjective opinion of the management representative and not of TripAdvisor LLC
RoadWarrior4558
Texas
258
Reviewed 13 June 2021
Fabulous Hotel

Great hotel with fabulous personnel and luxurious accommodations. Stay here every time we are in OKC. Close to Bricktown, Civic Center Music Hall, Chesapeake Arena and many great restaurants. Great bar and restaurant on site as well.

Review collected in partnership with Hilton Hotels & Resorts
This business uses tools provided by Tripadvisor (or one of its official Review Collection Partners) to encourage and collect guest reviews, including this one.
Ask RoadWarrior4558 about The Skirvin Hilton Oklahoma City
Thank RoadWarrior4558

RoadWarrior4558, thank you for your return visit and for sharing your wonderful comments. So pleased to hear you enjoyed. We look forward to many more visits from you in the future!

Report response as inappropriateThank you. We appreciate your input.
This response is the subjective opinion of the management representative and not of TripAdvisor LLC
gwatwell2021
Saint Louis, Missouri
1
Reviewed 8 June 2021
Excellent Stay.

Check-in to check-out not one bad thing to say. The staff was very warm and receptive. Accommodated an extended day in a few minutes. Was always greeted with a smile and asked if there is anything we need. Would stay again without question.

Review collected in partnership with Hilton Hotels & Resorts
This business uses tools provided by Tripadvisor (or one of its official Review Collection Partners) to encourage and collect guest reviews, including this one.
Ask gwatwell2021 about The Skirvin Hilton Oklahoma City
Thank gwatwell2021

Perfect...as it should be! I'm so glad you enjoyed your experience gwatwell20201 and thank you for sharing it. Hopefully we will see you again very soon.

Report response as inappropriateThank you. We appreciate your input.
This response is the subjective opinion of the management representative and not of TripAdvisor LLC
voolash1983
Duncan, Oklahoma
5539
Reviewed 30 May 2021 via mobile
Combat Vet Money NO GOOD HERE

We received a comp stay because the last time we stayed we were lied to about the swimming pool and the hot tub being open when in fact it wasn't. We get to the hotel and check in and they ask for a $50 "incidentally" fee which they say you will get back when you check out which is another lie. I didn't have the $50 on my card but I had cash ON HAND and STILL WAS REFUSED. Which according to them my money isnt good enough but my card is good enough???And they want your card number so they can TAKE the $50 and never return it back. So all in all we didn't stay at our "free comp" stay because it WASN'T FREE ANOTHER LIE. THANK YOU FOR TURNING AWAY A COMBAT VET OF IRAQ ON MEMORIAL DAY WEEKEND OVER $50. You can keep you "Free comp" that was given to me because it WASN'T FREE! I now see who the Skirvin caters to and its DEFINITELY NOT VETERANS PERIOD. I was once again surprised by "hidden charges". After all was said and done I LOST $450 staying at this hotel, and that is not including the travel to the hotel which is over 80 miles from where I live. Me and mine WILL NEVER STAY AT THE SKIRVIN AGAIN, AND I WILL LET MY FAMILY AND FRIENDS to NOT EVER STAY HERE. I'm ALSO A ALUMNI OF WWP AND IAVA they too will here about my experience over $50. PATHETIC

I am so sorry we have had so many misunderstandings voolash1983 and you are angry with us. That is never, ever our intention to make a customer upset or angry. Definitely misunderstandings. I really tried to make things right for you and I sincerely am sorry it did not work out.

Report response as inappropriateThank you. We appreciate your input.
This response is the subjective opinion of the management representative and not of TripAdvisor LLC
View more reviews
PreviousNext
1…456…