Perfect for Trip to the Beach - Rus Mar Motel

Rus Mar Motel
Lock in the lowest price from these sites
Agoda.com
Prices are the average nightly price provided by our partners and may not include all taxes and fees. Taxes and fees that are shown are estimates only. Please see our partners for more details.
Relleog
Geneva, New York
176

Perfect for Trip to the Beach

Very clean and all we needed for a trip to the beach. Pet friendly and close to the beach, staff is welcoming and helpful. Bring your own pillow (the ones they provide are new and feel like they might be made of clay).
Will be returning again soon.

Trip type: Travelled with family
See all 126 reviews
Nearby Hotels 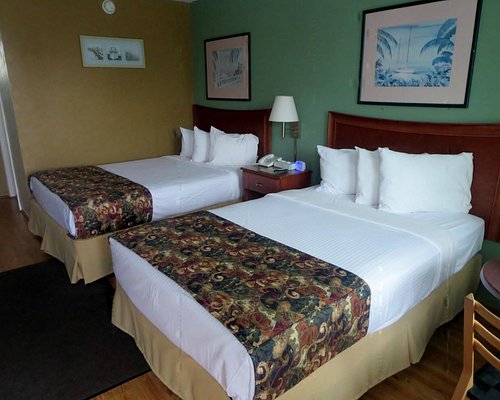 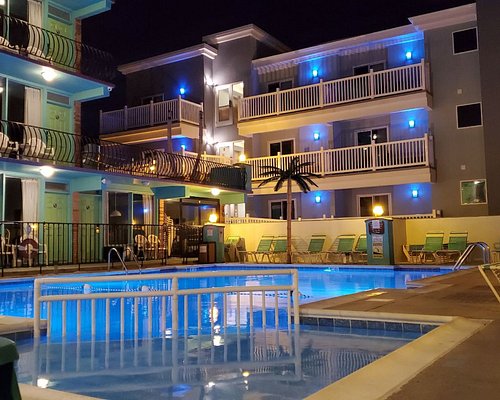 I've been coming to this motel for a few years w/ my Chiuhuaha Taco and have always been treated like family. Got a chi puppy, Chewy and the staff welcomed him as well. Owners Bob and Barb are so great and take good care of everyone that stays. Manager, Dariia, is so sweet and helpful. Clean fresh rooms, across from the beach and boardwalk and quiet, safe area. Can't wait to come back next month.

This review is the subjective opinion of a TripAdvisor member and not of TripAdvisor LLC
shelbywhittaker
Scranton, Pennsylvania
39
Reviewed 27 June 2018 via mobile
Dirty

Booked last minute,only choose here bc I had my dog.Sheets were covered in black hair and stains!! The bedding clearly was not changed. The owner didn’t seem to care not friendly nor apologetic whatsoever stay away!!

First of all you stayed with us last August and you stayed in two different rooms Friday and Saturday nights. Which we did fit you in because we were sold out that weekend.
One thing we have always worked incredibly hard here at the Rus Mar is to have the cleanest rooms at the shore. To insinuate that we don't change our sheets is ridiculous. We have dozens and dozens of reviews on TripAdvisor from guests about just how clean our Motel is. The fact that you put this mean-spirited and erroneous review on here a year after you stayed indicates to us that you're just trying to be hurtful to our business.
We're sorry you were not happy but we tried to accommodate you as best we could at the time. We also gave you a discount for the second night and thought that you were satisfied. But your review is completely out of line with all our others. At the date of your response we had well over 90 5 star reviews.
We are just a small family-owned business who takes a lot of pride in our Rus Mar family who return year after year.
You should really think about if you are being fair to us.

Report response as inappropriateThank you. We appreciate your input.
This response is the subjective opinion of the management representative and not of TripAdvisor LLC
DWcato
Chesapeake City, Maryland
17
Reviewed 11 June 2018 via mobile
American Legion Convention

Our Post normally has enough rooms at the Star Fire (next door) for all our members attending. This year some members got bumped out. Rus Mar warmly took us in.

Room was clean !! Linens were clean and fresh !!

If your looking for place that is steps away from the beach and boardwalk,, this is your place.

Thank you Rus Mar for taking us in.

This review is the subjective opinion of a TripAdvisor member and not of TripAdvisor LLC
10mbrenn10
Philadelphia, Pennsylvania
11
Reviewed 29 May 2018
Decent Place to Stay- I'd Make Some Changes as the Owner

Decent place to stay with our dog (which is why we chose it). I asked for early check-in since we were planning to head down early to avoid the holiday traffic from Philly, and to have somewhere to get settled in with our pup. I was told I could check-in early and then was asked to pay $35.00. I've never heard of a hotel/motel charging for early check-in. The room was also clearly already available and sitting waiting. Also, if one of your highlights is being dog friendly, than you need to take into consideration that people will need early check-in. Also, I paid an extra $60 to have the dog there.

Once inside our room we discovered our fridge was broken, and had to be moved to a different (smaller) room. Which did not have the extra single bed we initially had, so we had to share a bed with our dog which was a bit crowded and uncomfortable. We were also going to possibly invite another friend to share our room, thank god they didn't end up coming. I felt the early check-in fee or something should be refunded for this, or we could have been offered late checkout.

Once we got into our new room, it was clean, and it was nice to have a small kitchen and fridge. They also had a nice flat screen TV and big window for a view outside. Location is decent, but far from most of the bars, so we ended up Ubering several times which was pricey. Wish we were closer to the dog beach (which was awesome, highly recommend).

One thing that really bothered me was that we had another couple over to have a drink before heading out for the night (at 8 pm on a Saturday)- the owner came by and said they had to leave, no visitors, because he didn't want it to turn into a bunch of college kids partying. We're in our 30's- not bothering anyone- and were literally the ONLY people sitting our on the balcony. This was infuriating to me, and rather embarrassing and inconvenient as well. My suggestion is to revise your policy from no visitors to "if your visitors are making a disturbance, then we have the right to tell them to leave."

Overall it was fine, but probably wouldn't stay again. However, Dariia at the front desk was very nice (5 stars for her).

Our Rus Mar page on booking.com (where you chose our place over 13 other pet friendly motels in Wildwood) has check-in time, note that we do take pets and charges may apply, as well as a note that all special requests are subject of availability for an extra charge listed right under our property description. By booking a room with us you agree to our policies.
Confirmation with additional pet fee of $20.00 per night was sent to you right after we received your reservation. We also replied to your early check-in request notifying you that the room maybe not ready and there is an extra charge of $35.00 for check-in at noon.
At the time of check-in you signed our policy agreement: no visitors allowed was one of them; we take your signature as confirmation that you are agree and aware. We can send your a copy of signed agreement upon request at anytime.
The room you were moved to is a higher type and I did ask you if it would satisfy you, you checked if there was en efficiency unit and said "Yes". You spent three nights and unfortunately didn't mention anything was wrong until you checked-out and got home, which made the situation impossible for us to fix.
I truly was under impression that you liked it at the Rus Mar, and I wanted to welcome you to give us another chance maybe renting a bigger room with 5% discount as a returning guest.
I also wanted to thank you for taking you time reviewing our little place: hopefully your feedback will be helpful for our potential guests to pay more attention to our policies before they book a room.
We did try to do our best: both rooms you saw were clean, we upgraded you to an ocean view room as soon as the problem with the fridge was addressed, all extra charges were clear before your arrival, and you did sign our agreement at the check-in. I do wish we were located in North Wildwood closer to the nightlife but our location is what it is 5010 Ocean Avenue, right across the street from the beginning of the boardwalk and the Ocean.
With all of it being said three stars you gave to us feel a bit unfair.

Report response as inappropriateThank you. We appreciate your input.
This response is the subjective opinion of the management representative and not of TripAdvisor LLC
Scott S
Philadelphia, Pennsylvania
53
Reviewed 11 October 2017
A doggone great place to stay!

The Rus Mar Motel is one of the many old-school-style motels in Wildwood. However, what makes them stand out is the personal service mixed with professionalism that turned our only visit into the first of what will be many. From the moment we checked in we were warmly greeted and given all of the information we needed on the area, including pet friendly businesses. Since this was our first vacation with our puppy we didn't know what to expect so the support and greeting from the owners was reassuring and made the entire experience a great one. Hints about the area, personal stories, and genuine interest in our lives made us feel like friends instead of just guests. If you have a pet you like to vacation with, I highly recommend the Rus Mar. Even if you don't have a pet, the quality of the staff and cleanliness of the motel itself would make it worth a stay.

Room tip: Upper level provides better views, but you have access to the balconies no matter where you are staying.
Ask Scott S about Rus Mar Motel
1  Thank Scott S