ZenHotels.com
Prices are the average nightly price provided by our partners and may not include all taxes and fees. Taxes and fees that are shown are estimates only. Please see our partners for more details.
rachaelhM1627ZP
1

Wonderful stay!! Hotel is right off the highway, great if you're super tired. Room decor is a bit dated but clean. Staff was super friendly and helpful. Coffee cart for small breakfast options, which not a lot of hotels offer during pandemic.Just great small town friendly feeling. 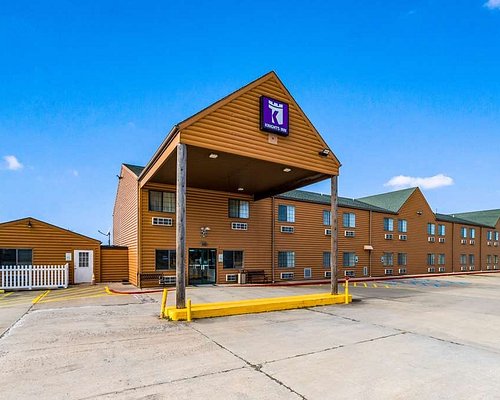 Great Stay Friendly staff , very helpful had a good nights sleep very clean housekeeping did a awesome job. they could not serve breakfast due to covid restictions but had fresh coffee and danishes very affordble

This review is the subjective opinion of a Tripadvisor member and not of TripAdvisor LLC.
truckerdriverman123
1
Reviewed 11 December 2020
Breakdown

Great Stay ! Clean and comfortable. Great Staff! Great price, close restaurants. New Lobby ! General Manager gave me a ride to the airport because my truck broke down. I will definitely stay here again.

This review is the subjective opinion of a Tripadvisor member and not of TripAdvisor LLC.
FLSTC08
Owatonna, Minnesota
258100
Reviewed 5 August 2020 via mobile
Great people

The hotel is pretty dated but the owner is definitely trying to keep it up. The room was comfortable and mostly clean, the plumbing was not up to par. The bed is an adjustable one but the base is very noisy.
The owner was very friendly and helpful.
I would stop here again.

This review is the subjective opinion of a Tripadvisor member and not of TripAdvisor LLC.
Travel79190h
1
Reviewed 30 June 2020
Owner has an explosive temper.

My father and I stopped at this motel after being on the road for 2 days, we both were exhausted and had to go to me bathroom, I stayed outside and smoked a cigarette while my dad went in, when he returned I asked how the bathroom was and he stated they had a sign up but let him use it, when I went in to use the bathroom and check us in the owner was sitting in the lounge area watching TV, when I opened the door to go into the restroom he rudely asked me if I can read, I responded yes I can and do you not have a restroom in the lobby for guests, he became enraged and started yelling and cussing at me, and stated that he pays the fu$%ing Bill's and to get the f%$k off his property or he'd have me arrested for trespassing.i was shocked by his behavior and left shaken.i left a google review and rather than apologize he lied and said I urinated on his bathroom floor. When reading his reviews on google I saw one where a man said the owner pulled a gun on him. I'm usually not one to write bad reviews, in fact this establishment is the only bad review I've written, but I feel this man is truly dangerous and people should be warned!PLEASE READ OTHERS REVIEWS AND STAY AWAY!

This review is the subjective opinion of a Tripadvisor member and not of TripAdvisor LLC.
Angela O
Liberty, IL
35
Reviewed 8 July 2019
Get what you pay for

We stayed here while attending a wedding in the area. Hotel was nice for the money. Seemed clean other than the floors seemed like they need a good cleaning. The front desk clerk was super nice and friendly! We would stay here again if the need arises!

Review collected in partnership with this hotel
This business uses tools provided by Tripadvisor (or one of its official Review Collection Partners) to encourage and collect guest reviews, including this one.
Ask Angela O about Americas Best Value Inn New Florence
Thank Angela O