US$200
US$134
Free cancellation until 18/03/21
Reserve now, pay at stay
View Deal
Booking.comUS$200
ExpediaUS$189
Hotels.comUS$189
Trip.comUS$134
Agoda.comUS$189
ZenHotels.com
Prices are the average nightly price provided by our partners and may not include all taxes and fees. Taxes and fees that are shown are estimates only. Please see our partners for more details.
carloisip
Angeles City, Philippines
278

The hotel was really clean and that health protocols were in place which made us feel reassured and safe especially with the current pandemic. The room was spotless and really comfortable to stay in. Facilities were also well kept. Special thanks to Jhune from housekeeping which made up our room as he was very nice and hospitable and did a great job.

See all 459 reviews
Nearby Hotels

Park Inn by Radisson Clark
US$76
Booking.com
View Deal
Free cancellation
Reserve now, pay at stay
Expedia
US$76
Agoda.com
US$69
Hotels.com
US$76
View all 6 deals from US$69
983 reviews
6.1 km from Clark Marriott Hotel
We compared the lowest prices from 6 websites 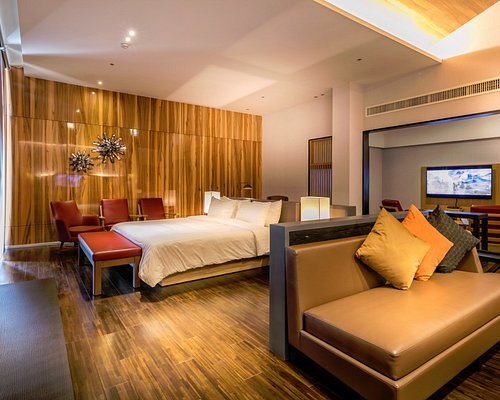 Expedia
View Deal
Free cancellation
Pay up to 12X
Hotels.com
US$180
Agoda.com
US$142
Booking.com
US$180
View all 5 deals from US$142
403 reviews
0.6 km from Clark Marriott Hotel
We compared the lowest prices from 5 websites

Kingsley's Hotel And Gastro Pub
US$88
Booking.com
View Deal
Expedia
US$80
Agoda.com
US$58
Trip.com
US$76
View all 6 deals from US$58
40 reviews
1.5 km from Clark Marriott Hotel
We compared the lowest prices from 6 websites
Hilton Clark Sun Valley Resort
US$130

i would love to thank and appreciate the effort of the stuff each time we ask them a small service, it's quick efficient and leaded by a nice way, I thank also the generosity of the stuff asking them for one bottle of water but they're offering even more, specially one of the stuff called Allen, I said i forgot my iphone charger and he offered me one saying it's very important, keep it so you won't have any issues later on.

Though I may have some minor inconveniences, these simply outweighs by the service and hospitality in the Executive Lounge.

Thank you to EL Staff lead by KJ, Allysa, Kim, Janine and Noriel. Keep up the good work and Marriot brand of hospitality.

Special thanks to Mary who tirelessly convinced us not to transfer to another hotel.

This review is the subjective opinion of a TripAdvisor member and not of TripAdvisor LLC
clarissejusa08
Bulacan Province, Philippines
1613
Reviewed 30 January 2021 via mobile
Pampered Guests

We always enjoyed our stay here as they always pampered us through great service and very relaxing accommodation.

Safety and health protocols are being implemented to give us peace of mind during our stay. They even upgraded our room to a suite, for free :)

Definitely we'll go back again with our kid after the pandemic..

I love to stay at the Clark Marriott. The staff are always happy, good natured, and willing to help you in any way. Patrick, the Concierge, is super attentive and more than willing to help you with all your needs. The whole area around the hotel is undergoing some great upgrades. This place is just gonna continue to get better and better. I look forward to many more future visits.

This review is the subjective opinion of a TripAdvisor member and not of TripAdvisor LLC
kristaj302
1
Reviewed 26 January 2021
Customer service at it’s finest!

Always dependable in delivering the world class quality of service! From food to hospitality, pre or during this covid scare, you have consistently deliver. Thanks Clark Marriott for going over and beyond in making us feel safest as we had our first first face to face event since the pandemic.