Jell-E-Bean
Contact accommodation for availability.
There are similar hotels available.
View all
483emh
11

Review of Jell-E-Bean
Reviewed 2 weeks ago

I ignored the reviews because I'm not picky I'm a party girl myself I thought I wouldn't mind the loud and messiness. Called the owner asking if we could visit the trailer park the next day he said yes, seemed very nice. The next day we called before we were about to show up and he had no clue what we were talking about. Did not remember the conversation at all. Is this man on drugs? How do you not remember a conversation with a customer from yesterday. After that he said he would call me back in 10 minutes next thing you know my number is blocked. He could've got extra money but decided to snort a line instead.More 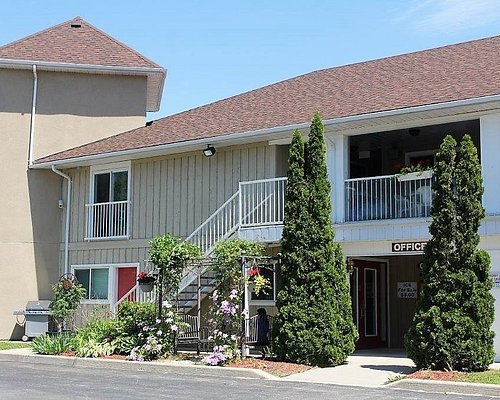 Oasis By The Bay Vacation Suites

Well, to all these 5 star feedbacks that say "i grew up here and the park is great", here is some news and updates for ya. New owners own it and the park is a dum&. Others that have put up a "positive" feedback are either people that have never ventured into the park, or are older seasonal that do not care about anything else in the park but their own lot.

Nothing has changed in 7 years that i have been here. Owners will sweet talk you and tell you what big plans they have for next year for the park, hence the reason for fees to go up every year. This year fees went up 500$

Ever see a documentary about Chernobyl and everything that has been abandoned there since the 80s? Well, that's how the playground for kids looks like. It is unsafe, filthy, and old.

Two years ago, there were a couple in the park and they had one of these portable tent/car ports setup where they did body work on cars, and painted cars there. YES, in the park!!!

New people are brought in, as long as owners receive some sort of payment. Usually there is 3-4 20-30 year old trailers that are abandoned at the end of the season because people that were brought in can not afford the fees. These are the people that nobody wants in the park.

I had numerous occasions where i caught people on my security cameras wondering around my lot and taking things.
We had brake ins, to the trailers, sheds etc. Yes, it got to the point that i installed cameras on my lot.

The only good thing in the park is a few bunches of people there. People say "Oh, the beach is close". Well, other parks offer heated pools brand new playgrounds, and activities for kids EVERY weekend. Jell e Bean offers NOTHING.

Owner does not hire anybody.

Owner is only here during weekends and long weekends. Main reason is to collect cash from tent area. Otherwise there is NOBODY here that's hired by them. Maintenance personnel in the park are people that were given above mentioned abandoned trailers and a small lot to stay for in exchange for labor. That creates "management" that wonders around the park and harasses seasonal for booze and other things.

Last year we had a girl in the park OVERDOSE on drugs and DIE, her bf had another female friend few weeks later after the incident that OVERDOSED and luckily was saved by paramedics. That individual was renting a trailer from the owners across from my lot. Every half an hour, around the clock, he would go to the gate and meet people in cars. Guess what he was doing?
The trailer he was renting had NO SEWER AND WATER. He would defecate on neighboring lots. Bylaw was notified.

These are the things i have witnessed in the park. Luckily we will no longer be a part of this Establishment starting this year. I am GLAD we are gone and regretting not taking my trailer out of that SHI% HOLE sooner.

Check out the pictures in this review and make your own decision.

This review is based on my experience throughout 7 years i have been in the park. It is based on my own findings and experience. It might change if there is any updates to the park and the way current owners conduct business. For now, it is what it is, and don't trust ANY 4 or 5 STAR REVIEWS.

There is no change in management in the park

Well, it was a place to sleep for 2 nights. The campsites were right by the busy road, so there was loud traffic until 10pm and started at 6am.
There were no music rules so we had battles of the music genres between 5 camp sites until 12am.
Showers are $1 for 5 mins. Takes 1 min to heat up and then goes cold after 4 mins. No need to throw in the second quarter.
Water and electricity are shared between sites.
Lots of play structures so it eould be good for kids.
Sorry, not a lot of positives.

Park is run down. It is dirty, outdated, and falling apart. There is absolutely nothing positive about it. Tons of old trailers. Owners take on "new" seasonals as long as they can pay some of the fees. At the end of the season park ends up with garbage trailers abandoned and just standing there. Weird people, weird. Some have aggresive dogs and use construction fences around their site.

Nothing for kids to do

Few years ago people put up a car shelter tent and were doing body work there and painting cars. IN A "FAMILY" PARK!!!!

Whoever put positive reviews here is either related to owners and was paid to do so.
STAY AWAY

Dear customer, you are a seasonal camper, as you can see, we are always open to suggestions and complaints because you continue in this Camping if you do not like it ?.
Many clients have their multi-year trailers but they are very well cared for, they fix their park and they are good neighbours.
At Jelle Bean, we appreciate that. We invite you to come to our office and present your complaints to us, so we can look at them together. But at JB we do not discriminate against those who have an old trailer in good condition, clean and are good people, and neighbours, all is about have a good holiday and be happy.
And we don't have parties, and we control a lot of the noises.

In reference to what you talk about years ago, surely many things happened, but JB is in a process of great change, and it would be good if your good intentions point to that. Thank you

Report response as inappropriateThank you. We appreciate your input.
This response is the subjective opinion of the management representative and not of TripAdvisor LLC
695cameront
Whitby, Canada
21
Reviewed 19 February 2020
Worst decision of my life

This park looks all happy go lucky from the drive past, SIKE! We were moving out of our old park cause the psychotic owners had driven us over the edge so we thought the move across the road would be a piece of cake. Oh boy we’re we wrong... the owners seemed nice from the beginning and that was awesome, the park is squeezed into a corner between hwy 60 and a little side road so getting our 32 foot trailer down would be a challenge, but that’s not the worst of it, these dumb morons don’t understand what autism is and how it affects people. They overheard from people across the road that our family was disruptive and a overall disturbance to all, so the owner took it upon his/her self (I could care less at this point) to call my family and say we and our autistic family member were not welcome in their park. Besides it looked like the place was built in the 50’s and left to rot which in all seriousness I pray it rots to the ground along with all the stuck up self centred guests and staff.

Sorry for your unfortunate experience, Jelle Bean is under new management and we are doing our best to improve every day. I hope that this answer, although late, serves to make it known that this would not happen again.
Our most sincere apologies. Administration

Report response as inappropriateThank you. We appreciate your input.
This response is the subjective opinion of the management representative and not of TripAdvisor LLC
Rene H
Niagara Falls, Canada
2
Reviewed 12 February 2020
Outdated but alright

The park is alright outdated but if you're looking for a place close to Collingwood you'd be alright there. The manager is great and helps out where he can. Just make sure you look your trailer ;) we went there at the end of the season so the park was empty.