Snaptravel
ZenHotels.com
Prices are the average nightly price provided by our partners and may not include all taxes and fees. Taxes and fees that are shown are estimates only. Please see our partners for more details.
DJ_RayA_0
51

What an incredible vacation to Turquoise Place Orange Beach, AL. After a long car ride with 3 children our room was ready for us to get into (October 2021). We really loved the amazing ocean views from the balcony. Being able to just step out to the balcony in the morning to catch the sunrise and listen to the waves of the ocean was so relaxing! The gas grill on the balcony made it convienent for some quick meals when we didn't go out. This place is great! A lot of choices for pools, indoor pool and whirlpools, outdoor pool and lazy river. Turquoise Place also has a great sauna, steam room, tennis courts and large exercise room. Easy access to the beach. Wonderful place to stay on Orange Beach. I highly recommend.More

Thank you for taking the time to leave a review- we truly appreciate it. There's nothing like getting out of the car, stepping into a Turquoise Place unit and spreading out! Our oversized rooms are great for that. I'm so glad you enjoyed all of the amenities. We do hope you return again soon!

Report response as inappropriateThank you. We appreciate your input.
This response is the subjective opinion of the management representative and not of TripAdvisor LLC
See all 476 reviews
Nearby Hotels 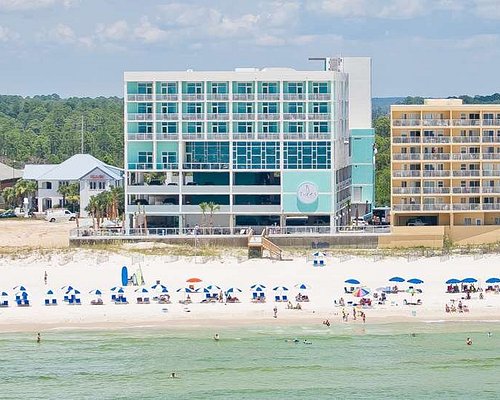 Hotels.com
View deal
Booking.com
ZenHotels.com
US$150
Expedia
View all 8 deals from US$150
1,143 reviews
0.5 km from Turquoise Place
We compared the lowest prices from 8 websites

We love Turquoise Place. We have been several times. It has become our annual family reunion. We have some that come from Washington, some from Michigan and some from Mississippi. We rent nice big spacious units and spend a good amount of money at the resort between the actual units and the food and drinks at the facility. It is such a luxurious resort, but needs to have customer service that matches that luxury. When we go on vacation we like to spend a little more on the rooms to get that extra experience. We didn't get that this time.

The bathroom shower curtains in D1309 were gross and needed to be changed. Cleaning could have been a little better. I also thought Keurig machines were fairly standard now, but the 4 bedroom unit we rented didn't have one.

We love Turquoise Place so we hope adjustments will be made. There are certainly plenty of other condo choices right down the road.

This review is the subjective opinion of a Tripadvisor member and not of TripAdvisor LLC.
jenaeb24
Hawesville, Kentucky
2115
Reviewed 9 October 2021 via mobile
Good, but not great

We’ve stayed here at Turquoise palace several times. Each year it’s always a little more run down. It is nice but it’s not as nice as it used to be. No kids activities anymore, they’ve replaced those with a expensive snowcone bar. The units aren’t as clean as they should be. Especially the showers/tubs. Our dishwasher (D902) barely worked. Nothing on the top rack got clean. We ran it 3 times. The 2 non master bedrooms lighting was atrocious. The bathrooms need more places to hang towels.

We had an issue with one of bar attendants being rude to our son when he was ordering food on a couple different occasions. The front desk apologized but my family spent many many dollars at the bar/restaurant. No reason for that nonsense. The lady that worked there at the bar was phenomenal. The dude, not so much.

We love that the lazy river is heated now! That was an awesome improvement. We also loved the new boardwalk.

We will be back, my dad loves it here. Just a few little details would make all the difference.

Room tip: Use the other set of elevators. Otherwise you’ll spend half of your vacation waiting for the main one.
Trip type: Travelled with family
Ask jenaeb24 about Turquoise Place
Thank jenaeb24

Thank you! I will be sure to pass these comments along. We appreciate you and I'm glad you enjoyed the heated lazy river.

Report response as inappropriateThank you. We appreciate your input.
This response is the subjective opinion of the management representative and not of TripAdvisor LLC
CAVR58
Madison, Alabama
3120
Reviewed 27 September 2021
Beautiful Views and Great Amenities

Driving up you are struck with the beauty of the buildings: it stands out! Unit 803C was rented by Meyer Real Estate. It's decorated with soothing blue and beige tones and mostly-fully stocked. We enjoyed the beach, pools, and lazy river.
Unfortunately we had an issue upon check-in as the bed in the master bedroom was not only unmade, but appeared to have been slept in. The other two bedrooms were well made. We immediately took a photo and called the rental company (Meyer) and they took note and said they would send someone over (Note: they never said "when.") Check in was after 4 p.m. and we waited a few hours and unpacked, yet nobody came. Around 8:30 we realized nobody was coming that evening and we would have to wash/dry the bedding ourselves. We expected better for5 what we paid. A few days later we locked ourselves out of the room and again, called Meyer. They said they did not have a key to our room and could not help us, but advised us to seek the Spectrum agents on-site. Spectrum is the main rental agency of the property. It was after hours and there was no one at the desk so we found the parking guard. He could not find our name listed as residents of the property. Eventually I convinced him to let us in as we were already on property and my driver's license was in the room. Also, it appeared we weren't on the list he had because we did not book through Spectrum. If we return, we will book through Spectrum.

I am sorry for your troubles, but I would highly recommend what you suggested for your next stay- Spectrum Resorts will make sure things go seamlessly, as they are located on-site. You will also get access to the free breakfast, and discounts at Change of Pace and Cabana 8, as well as the cabanas. We appreciate your review!

Report response as inappropriateThank you. We appreciate your input.
This response is the subjective opinion of the management representative and not of TripAdvisor LLC
909brittanyb
22
Reviewed 15 September 2021 via mobile
Second to None in Luxury and Amenities

From the spacious rooms and balcony to the Spectrum Lounge and extra amenities, there is no place like Turquoise Place. We always enjoy our stay here and look forward to returning each year. Always something to do (or nothing to do) depending on your preferences.

Report response as inappropriateThank you. We appreciate your input.
This response is the subjective opinion of the management representative and not of TripAdvisor LLC
Docisley
Huntsville, Alabama
31
Reviewed 9 September 2021 via mobile
If you like the hunger games then you will love the Turquoise Place

The place is more beautiful then the pictures online describe. We are a very middle-class family and it took a lot of sacrifices To be able to stay for a week here. The most disappointing part were The people who Managed it……A real hunger games

Room tip: It’s a beautiful place for the rich but If you don’t have a Louis Vuitton purse turn around and get it out.
Trip type: Travelled with family
Ask Docisley about Turquoise Place
Thank Docisley

Hello there. Thanks for leaving a review for us- we truly appreciate it. I would love to be able to start an offline conversation about your hunger games reference...Feel free to email me at alowry@spectrumresorts.com.

Report response as inappropriateThank you. We appreciate your input.
This response is the subjective opinion of the management representative and not of TripAdvisor LLC
View more reviews
PreviousNext
123…
<script type='text