US$116
US$100
View Deal
SAVE US$16
Free cancellation until 02/03/21
Agoda.comUS$115
Hotels.com
Expedia
View all 7 deals
Prices are the average nightly price provided by our partners and may not include all taxes and fees. Taxes and fees that are shown are estimates only. Please see our partners for more details.
Christopherr01
11

We stayed in river front that room was nice, beautifully appointed, very comfortable bed. Also the hotel have gorgeous pool areas, beautiful bar and restaurant, excellent service with historic, very well appointed rooms. The staff was very attentive professional and friendly especially Mr. Jackie and Ms. Panida at front desk. Everyone is very thoughtful and caring to insure that you are enjoying your stay.More

Please allow us to thank you for your visit and for choosing Shangri-La Hotel, Bangkok.

We appreciate learning that you had an exceptional stay with us and particularly enjoyed the hotel's facilities provided to our guests.

Thank you for sharing your Bangkok’s stay experience with us and we hope that you will consider us for your future visit.

Report response as inappropriateThank you. We appreciate your input.
This response is the subjective opinion of the management representative and not of TripAdvisor LLC
See all 11,997 reviews
Nearby Hotels 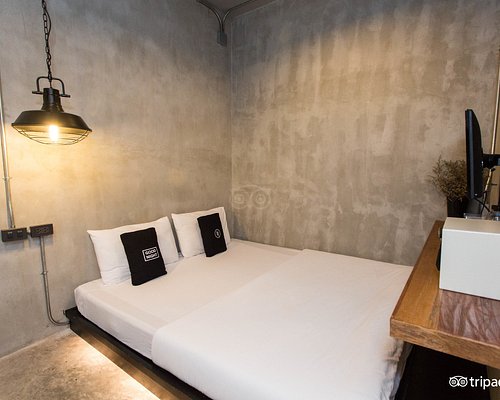 Expedia
View Deal
Booking.com
US$23
Agoda.com
US$22
Hotels.com
View all 6 deals from US$22
1,359 reviews
We compared the lowest prices from 6 websites 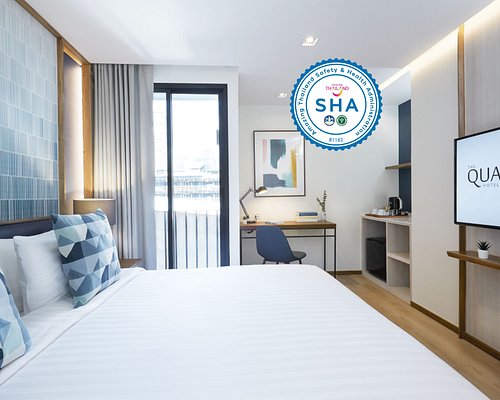 Expedia
View Deal
Booking.com
US$24
Agoda.com
US$16
Hotels.com
US$21
View all 5 deals from US$16
139 reviews
6.0 km from Shangri-La Hotel, Bangkok
We compared the lowest prices from 5 websites

Expedia
View Deal
Free cancellation
Pay up to 12X
Hotels.com
US$22
Agoda.com
US$14
Booking.com
US$20
View all 5 deals from US$14
1,915 reviews
3.8 km from Shangri-La Hotel, Bangkok
We compared the lowest prices from 5 websites
Siri Sathorn Bangkok by UHG

Expedia
View Deal
Booking.com
US$19
Trip.com
US$15
Hotels.com
US$17
View all 5 deals from US$15
752 reviews
2.8 km from Shangri-La Hotel, Bangkok
We compared the lowest prices from 5 websites
Breakfast included
The Quarter Silom by UHG

Expedia
View Deal
Booking.com
US$22
Agoda.com
US$15
Hotels.com
US$18
View all 6 deals from US$15
251 reviews
11.4 km from Shangri-La Hotel, Bangkok
We compared the lowest prices from 6 websites
Breakfast included
Admire Thonburi

Expedia
View Deal
Booking.com
US$24
Agoda.com
US$15
Trip.com
US$34
View all 5 deals from US$15
57 reviews
2.5 km from Shangri-La Hotel, Bangkok
We compared the lowest prices from 5 websites
SKYVIEW Hotel Bangkok
US$46

Great value for a 5 star hotel And during this period, use the right to reduce 40% from government programs.
The view of the room is very beautiful, suitable for relaxing. Without having to drive far with the best service!

I would like to extend my sincere gratitude for choosing to stay at Shangri-La Hotel, Bangkok and for sharing your beautiful review on TripAdvisor.

It gives us pleasure to read your review and learn that your experience was exceeded your expectation. Thank you for your patronage and we are very much looking forward to welcoming you back to Shangri-La Hotel, Bangkok in the near future.

Report response as inappropriateThank you. We appreciate your input.
This response is the subjective opinion of the management representative and not of TripAdvisor LLC
trvlin_man
United States
200312
Reviewed 10 January 2021 via mobile
A challenging ASQ

These are difficult times. I understand that. But I booked my ASQ at this hotel for two reasons. First, that a high-end hotel would take good care of me. And second, because they had balcony rooms and that would help preserve my sanity.

First, I was fairly stressed out and didn’t feel all that safe. Why? On my first morning at the hotel, while taking a bath, human waste bubbled up on the floor of my shower, a couple of feet away. Not a little, but covering it. I was shocked, disgusted, and frightened. Covid is transmitted in human waste. The hotel treated this as an “inconvenience” when it was a biohazard and a shocking lapse in safety. I changed rooms, but had to worry for over a week about a possible dangerous exposure (I am at high risk). I have photos but they are too revolting to post here.

Next, there was an incident with the BNH Hospital nursing staff. You may (or may not) have heard about first one nurse, and finally 6-7 becoming infected. This happened during my stay. These nurses were serving the Pullman and Meridien ASQ’s (but Shangri-La claimed they had nothing to do with this hotel), and Shangri-La is just a few blocks away and also part of the BNH support staff. So I received no real information and had to worry about whether I had been exposed by the staff that was there to protect me (or so I thought).

Others have described the food (reminds you of the old joke, the food was meh and the portions too small). When you are in “jail” for 15 days all you have to break the boredom are the meals. They’re pretty heavy on the Thai items (inexpensive, I guess), with few Western items and few Chinese also. Nothing to drink but bottled water or coffee/tea unless you want to pay $5 for a soda or something. No alcohol whatsoever (I know it’s from the Health Ministry, but a glass of wine at dinner doesn’t cause Covid).

After your second negative test (I believe day 7), you’re allowed 30 minutes of “relaxation” each day. By relaxation I mean being escorted by a terrified guy wrapped in plastic to a chaise on a concrete walkway by the river, complete with mosquitoes and diesel fumes. 5 minutes of this “relaxation” was enough for me - my balcony had neither mosquitoes nor fumes.

Leaving was needlessly complex. I couldn’t have a car pick me up at the Krungthep Wing, and was offered a tuk tuk to the main building (I had a number of bags, this was problematic”), or a hotel limo (costing something like $70-80 to go a mile to my next hotel). Finally, after much discussion I was able to have a car pick me up (providing a full description of the car and license number, of course).

Is this place worth 125,000 baht? I didn’t feel all that safe or well cared-for, so no, not really. If you want a balcony ASQ room at lower cost, I might consider the Movenpick Resort.

Thank you very much for sharing your recent stay experience with us.

We are disappointed to learn of the issues encountered during your stay. Please allow us to apologize for the disappointment and inconvenience caused to you and thank you for highlighting the areas that require improvement. Rest assured that this is not the experience that we strive to deliver to our guests and we will work on the necessary actions to improve on our product and services.

Thank you once again for your valuable feedback. We hope you will give us another chance to regain your trust in our brand. Please do contact me directly via my e-mail joanne.chung@shangri-la.com so I can personally look after your arrangement for a flawless stay.

We are looking forward to an opportunity to potentially welcoming you back in the near future.

Report response as inappropriateThank you. We appreciate your input.
This response is the subjective opinion of the management representative and not of TripAdvisor LLC
V4338ERjanen
Bangkok, Thailand
22
Reviewed 9 January 2021 via mobile
Review Next2 cafe

Thank you very much for sharing your kind review on TripAdvisor.

We are delighted to learn that you had a magical visit with us and that our service met your expectation so far. My colleagues and I assured you that we will continue to strive the higher Shangri-La standards as well as service so that your next visit will be another beautiful one. We hope to welcome you back to our riverside sanctuary soon.

Report response as inappropriateThank you. We appreciate your input.
This response is the subjective opinion of the management representative and not of TripAdvisor LLC
suparata2021
11
Reviewed 9 January 2021
Joy and happiness moment with friends here!!

Miss Yuwannee and Miss PIS are very attentive and make us very impressive.
Dining is full of variet of choices.

Recommended for celebrating with friends and family.

We would like say thank you for your kind review and your compliments to the team for their great dedication towards our guest. Please allow me to share your compliments to our team, ensuring that we will continuously striving the best Shangri-La’s standards of service for your future pleasant stay.

We awaits to serve you once again not in too distant.

Report response as inappropriateThank you. We appreciate your input.
This response is the subjective opinion of the management representative and not of TripAdvisor LLC
Pierre V
Surin, Thailand
215286
Reviewed 5 January 2021
TOO LONG QUARANTINE (SQA)

We spent 16 days there with an efficient reservation, friendly staff, including “mediators” (Thanks to Khun Yue and F&B manager Jose ).

Thai food and desserts mostly good and nurse helpful, even for small problems like wound healing or blood pressure check.

Not that great were the sent SQA regulations, not friendly presented, missing information like no room cleaning during 7 days and daily 30 minutes outside walk after 7 days.

No alcohol allowed , (no medical reasons) and too long 16 days ( government regulations since worldwide prescription is max. 10 days .)

Our room was close from a 6 driving lines bridge, sky train and river barges, 24 h/ day, impossible to use terraces.

Thank you for staying at Shangri-La hotel, Bangkok and for sharing your review with us. We appreciate your compliments to Khun Yue, Khun Jose and our service colleagues who have bestowed your Shangri-La moments.

We are truly sorry to hear that some aspects of your experience fell short of expectations pertaining to some missing information, the sound disturbance during your stay and the taste of our western meals. Please accept my apologies and rest assured your comprehensive feedback has been shared with the department heads of the concerned areas to prevent similar issues from occurring in the future.

We hope you will give us another opportunity to serve you better on a return visit should your travels bring you back to Bangkok. I assure you the team will do their best to better impress and deliver a seamless experience.

Report response as inappropriateThank you. We appreciate your input.
This response is the subjective opinion of the management representative and not of TripAdvisor LLC
View more reviews
PreviousNext
1…789…2000