US$168
View deal
Free cancellation until 02/10/21
Agoda.com
Trip.com
ZenHotels.com
Prices are the average nightly price provided by our partners and may not include all taxes and fees. Taxes and fees that are shown are estimates only. Please see our partners for more details.
TravellorNewDelhi
New Delhi
8547

the hotel is right on top of a hill, overlooking the ocean. amazing view. the rooms are spacious - all rooms have a living rooms, a small pantry, bedroom, dress area. the pool is nice a big. food was awesome. they have a nice deck near the pool and its amazing to sit and drink at night. i would suggest one should be here for 2 nights min. we stayed here only for one night and we still repent it. there is nothing to do but just relax, swim, eat and drink.

Room tip: Take the rooms on the first floor or second, better view of the ocean
See all 137 reviews
Nearby Hotels

Hotels.com
View deal
Agoda.com
Expedia
US$16
Trip.com
View all 5 deals from US$16
10 reviews
2.2 km from Semabu Hills Hotel
We compared the lowest prices from 5 websites 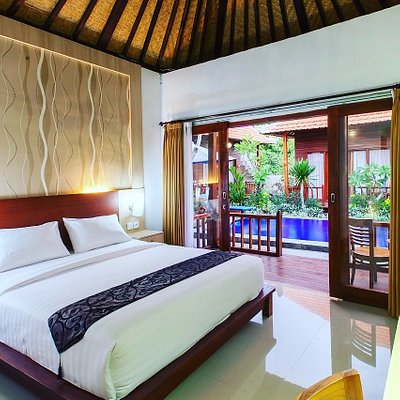 Hotels.com
View deal
Agoda.com
Expedia
US$19
Booking.com
View all 5 deals from US$19
40 reviews
1.9 km from Semabu Hills Hotel
We compared the lowest prices from 5 websites 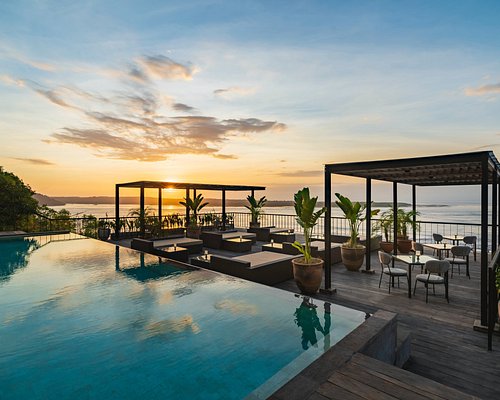 The hotel is situated on a hill overlooking the ocean.
Rooms are huge and very clean. It has a nice large infinity pool with amazing views. It has a restaurant with gorgeous views and delicious food. Many people from other hotels come to this restaurant for lunch and dinner. The hotel staff is extremely nice and very helpful. You can arrange a guided tour of the island in the front desk. You can also arrange a massage and they will send someone to your room for a great price. No where to really walk around hotel.
But it’s the perfect place to just relax and enjoy this little paradise island after a full day of exploring other parts of the island. I highly recommend it. It’s truly worth the price.
I will be returning

This review is the subjective opinion of a Tripadvisor member and not of TripAdvisor LLC.
nameless_travelle
112
Reviewed 18 March 2020 via mobile
You can get better or cheaper with the same purpose if going there

Nusa penida is amazing
But the hotel is basic, I'd call it a 2 or 3 star, Theo not nice thing about it is the pool and the view, other then that, there wasn't even coffee mugs in the room, the room had stains all over the place, the staaf are, Friendly but they not extra, they do their job and leave, the breakfast is basic, I must say the room is big but the it is unnecessary to stay there for longer then 2 nights

This review is the subjective opinion of a Tripadvisor member and not of TripAdvisor LLC.
misschellemybelle
Sunnyvale, California
715
Reviewed 9 March 2020
Beautiful Hotel on Penida Island

We stayed at Semabu Hills for two nights while visiting Nusa Penida and really enjoyed our stay. The food was great, our room had everything we needed, and the pool was beautiful! The bed was comfortable and the shower pressure and temperature was perfect! My only complaint was that the WiFi was not working when we were staying there. There are also a lot of bugs around the property, but it is a small Island so this is expected. We would definitely stay here again when visiting Penida Island.

This review is the subjective opinion of a Tripadvisor member and not of TripAdvisor LLC.
travel_ffej
Gianyar Regency, Indonesia
31
Reviewed 5 March 2020
Not Very Impressed

• Check In – Had to wait about 2 hours until my room was ready, despite the hotel knowing when I was arriving as they booked my boat ticket from Sanur. I had also requested a top floor, but was only on the second floor – which was not a big deal because I know it is only a request.
• Staff – overall pretty friendly staff, restaurant service was great, slow at times though.
• Food – could use more options for Vegan/Vegetarian. Pizza was really good! I found it strange that if you ordered room service they did not cover the dishes – maybe something to consider when transporting the food. However, be careful about having more than one coffee or juice at breakfast, I did not realize there was a charge for refills until I got my bill at check-out..
• Wi-Fi – was not working for the entire stay (4 days), which was a bit frustrating. The staff said it was due to a storm that happened on the first night of my arrival, but my Wi-Fi never worked before the storm either. When it is raining out or just exhausted from a day of excursions there is not much to do. The Wi-Fi did work in the lobby but was weak. I ended up having to use up all my phone data and went over by a lot in order to get some work done and watch Netflix. The times I did try to go to the lobby to connect, it was crowded with people also doing the same thing and there is not much seating, so I decided to pass and just pay for more mobile data through my phone – it ended up costing me over $300 CAD to complete my work and arrange further travel arrangements.
• Rooms- were pretty large and the bed was comfortable. The toilet did not always flush properly and the room had a funky smell to it, but it was manageable. The water leaks out of the shower pretty badly, so I almost fell a few times upon exiting the shower, so remember to put a towel there.
• Laundry – I dropped off my laundry early in the morning the night after I checked in and they said it was going to be finished that evening. I had to ask the next day and they didn’t give me a clear answer just said it was coming. Finally on the evening of my last night, I called several times and they kept saying it was being finished. I was a little nervous they had lost my clothing somewhere. They kept telling me they would call me back but never did, so I kept calling and they said it was still not ready. I was ready for bed and waiting to go to sleep when I called once again to see if my clothing had showed up. The reception said the laundry was back so I went down to get it (even thought they had told me as soon as it arrived they would bring it to my room). When I got to the lobby, the receptionist handed me a bag of women’s clothing, which was obviously not mine. He looked confused and said are you sure and I said yes, that is a women’s bra. He said it was the only laundry they had and told me to check again in the morning, but I told him I needed it tonight because I still had to pack because my departure was in the early morning, the next day. He said ok wait 10 more minutes and went to try and track someone down. He came back to my room shortly after with my laundry and said they forgot to drop mine off.
• Noise – although this is a small resort hotel, it seems to attract groups of loud people – or I just had bad luck. There were a handful of small groups who were very loud and as the rooms are only facing the pool the noise travelled easily to the room and was difficult to drown out the noise in your room, especially because these groups really liked to yell at each other when communicating. This is really out of the hotel’s control, but I found it very annoying.
• Overall this is an OK resort – I would say it would be a 2.5/5 stars comparing to the other properties I have stayed at during this trip to Bali and surrounding areas. Out of 6 hotels I stayed at on this trip, this one I would have to rank the least accommodating and pleasant. The place could use a gym for those days or nights when there is not much to do, especially when the WiFi is not working (which was my entire stay). The pool and views of the ocean and mountains are lovely, but I probally won’t stay here again though as there is not much to do if you are not on a day trip and nothing within walking distance from the resort. I think the hotel for the area is also a bit overpriced.

This review is the subjective opinion of a Tripadvisor member and not of TripAdvisor LLC.
Carrickferguson
6
Reviewed 18 February 2020 via mobile
The best accomodation on the island

I booked the hotel very last minute, almost decided to choose another accomodation, and i am glad i did. After strolling around the island i am confident to say this is just the best accomodation available on the island. Their room is super spacious, their staffs are just the best. Wake up on their room, open my door and see the magnificent mount agung right in front of you and listening to morning orchestra of birds sing along is among the moment i will cherish forever.

This review is the subjective opinion of a Tripadvisor member and not of TripAdvisor LLC.
View more reviews
PreviousNext
12…
<scr