US$1,110
View Deal
TripadvisorUS$1,110
Hotels.com
Trip.com
Booking.com
Agoda.com
Prices are the average nightly price provided by our partners and may not include all taxes and fees. Taxes and fees that are shown are estimates only. Please see our partners for more details.
Zafe1
Reading, United Kingdom
216

We are here with crystal in apartment 7 maisonette style room. The kids have the mezzanine floor and the double bed is way too big for the floor space. Not enough hangers in the wardrobe or floor space to put down a bag although the shelf area behind the bed is good to keep your stuff off the floor. The window has a draft there is no radiator on that level. The lighting is inadequate and the support pillar is next to the single bed is a hazard when getting up. There are not enough hooks to hang your ski clothes to dry out.

Downstairs there is not enough floor space under the stairs to store luggage bags if there are 4/5 of you with a bag each you will be falling over your bags. The cabling first the uplighter is dodgy and needs to pulled in and out from the plug to turn on.

The double sofa bed downstairs is hard and next to the patio door which has a draft even with the curtains pulled there is not much privacy when curtains are pulled open as the next apartment block can see straight in.

There is not enough worktop space to cook and prepare food so not even going to use the hob. the kettle is placed on the hob and plugged in to the left next to the bathroom door which has no ventilation only a fan extractor and can get very steamy when the shower is on - drink plenty water straight after in case of dehydration. The electrics in Italy are hit and miss and thus place is bad.

If the neighbouring apt are up and moving the chairs on tiled floor you can hear it as well as their plumbing.

From a security point of view the back fire exit doors are easy opened from the outside and accessed to the lift to all floors. The front door is locked at night and although your are given a bunch of keys I could not get the door to open so we entered from the back. This is also quite dangerous as the tiled that are layer down are slippery when wet, loose and ungrouted.

Because there is no snow in the town this February the location from the bus stop to walk in ski boots is too hard so we hired 2 lockers at the ski shop at the bottom of campo smith lift. Shame that the crystal rep or the shop didn’t tell you until you got the equipment. I had to push in and pay €30 per locker for the week as the alternative of walking uphill on a dry road with the ski boots would be unbearable everyday.

Also the ski shop that Crystal use is only open from 2-3 on the day of your arrival and luckily we arrived at 1:30 and beat the queue it is very small and very hot. Something that the rep should have warned us about.

Our flight from Standstead got in at 8:30 our coach had to wait for the Gatwick flight another 1:30hrs and then only one family got on. There were only 13 of us on the bus.

So far not happy .
More

Hello,
I'm replying late to your review, but I think it' s important to answer and explain better what's on our part.
I'm sorry you had such a terrible holiday, but I would like to separate what was wrong in the apartment from all the remaining problems with Crystal , the ski rental, etc, which we have nothing to do with.
Regarding the apartment layout, our amartments are meant for short holidays and are not private apartments on rent, therefore the space and the posotion of furniture is a little different.
Since last winter we have changed all the beds in the 11 apartments, we chose king size beds because we wanted to provide better sleep to our guests. As a result the rooms may become a little smaller due to the wider size of the beds. The number of beds is regular anyway, because the Italian law calculates the number of beds on the square meters available.
I'm sorry about the lack of hangers, but you probably did not ask the reception (we keep extra items in our closet).
Regarding the entrance when the reception is closed, we always explain it upon arrival, so I don't know what happened on the arrival day.
As a conclusion, I think you had some bad time due to some higher expectation, the lack of snow, etc, but I can assure future guests that Bardonecchia and its roads are pretty flat and easy to walk , we can improve our equipment in our apartments but what's most important is that our guests ask us anything they need during their stay (and not afterwards) .

Report response as inappropriateThank you. We appreciate your input.
This response is the subjective opinion of the management representative and not of TripAdvisor LLC
See all 98 reviews
Nearby Hotels 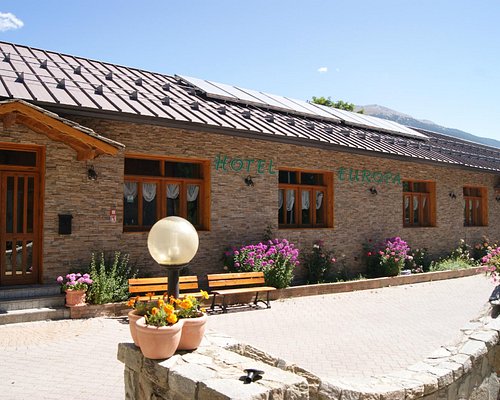 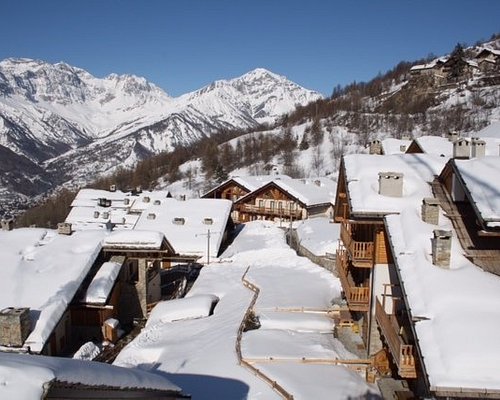 Residence Cianfuran
US$86
Tripadvisor
View Deal
Reserve now, pay at stay
Hotels.com
Booking.com
US$86
Expedia
US$87
View all 6 deals from US$86
193 reviews
2.2 km from Residence Villa Frejus
We compared the lowest prices from 6 websites

Hotels.com
View Deal
Booking.com
US$96
Agoda.com
US$96
Expedia
View all 5 deals from US$96
487 reviews
2.4 km from Residence Villa Frejus
We compared the lowest prices from 5 websites
Breakfast included
Bianca Hotel

We stayed here with Crystal ski in january on a ski holiday to Bardonecchia.
Not the apartment's fault, but Crystal's, but it said it was 100 metres from the slopes, whereas it was nearer a mile, maybe a little less but in snow took us at least 10 minutes and we are very fast walkers. There is a free bus though which stops about 50 metres away at the hotel La Betulla

Crystal also didnt inform us there was a city tax to pay.

However, the apartment itself we couldn't fault.
I contacted them prior to arrival to ask if we could have a balcony as i was not skiing due to awaiting a knee operation. They duly obliged and also sorted out a cheaper lift pass and ski hire for us which was great and saved us £100 on crystal prices for 3 people. The balcony was only very small but there was also a little area at the end of each corridor where you could sit outside on a bench with a cuppa.

On arrival we thought we'd have to wait a while as check in wasn't until 4pm, but our room was ready so we were checked in on arrival at around 1.30. Some places dont do this, even if the rooms are free, which I have never understood. Nice to see people being sensible and giving their guests a positive start to their stay! Check in was quick and efficient by a friendly young man.

The apartment for 4 was roomy clean and bright. There was an oven and 2 cooking rings, a kettle and utensils. We had a problem with cooker which blew a fuse but the owner was helpful and provided us with a sandwhich toaster to make toast.

The beds were comfy and the room was warm.

There was a washing machine in the basement and also a gym, but we only got to use it once as they closed it at 6, and my famuily rarely got back from the slopes until 5 30 as theyd get the last lifts up, then take the skis back then get the bus home. It would have been nice for it to be open later. There was also a sauna.
Reception staff were friendly and helpful but their English was not as good as the owners, so there was a bit of a barrier. We were told we could have just asked them to ring the manager though, so if you go and arent sure you're being understood, just ask to speak to one of them. (It is a husband and wife who run it)

If you stay here, they have many partners in the centre, including restaurants and shops were you can get a discount . The best here is Snowscape , the ski hire store. They do good quality ski equipment, we picked the best ones and they were about 69 euros for skis and boots, plus you get 15 euros off the lift pass. (They give you a slip to take in.) For 3 or 4 people its a decent saving.

thank you for your opinion

Report response as inappropriateThank you. We appreciate your input.
This response is the subjective opinion of the management representative and not of TripAdvisor LLC
Yellowbeanstudios
4
Reviewed 14 January 2018 via mobile
Skiing 2018

Villa Frejus is perfectly situated in Bardonecchia for the ideal Skiing trip, the accommodation is clean, friendly and spacious, staff were great and despite some minor maintenance work being carried out we weren’t disturbed too greatly.
I would highly recommend Bardonecchia and will most certainly be returning to Residence Villa Frejus.

thank you very much

Report response as inappropriateThank you. We appreciate your input.
This response is the subjective opinion of the management representative and not of TripAdvisor LLC
ianhB746AL
Manchester, United Kingdom
196
Reviewed 10 March 2017 via mobile
Basic but all we needed

Stayed for a few nights. Just enough space for 3 lads in one room with kitchenette in the room also. Sofa beds were ok and. Ore comfy than they looked. Free wifi but slow. TV and sauna were also included. It frayed at the edges and not luxury but no frills base for our ski hols

This review is the subjective opinion of a TripAdvisor member and not of TripAdvisor LLC
Slimmel
Leicester, United Kingdom
7936
Reviewed 14 February 2017 via mobile
Great apartments, close to ski bus stop

Great location less than 5 mins walk from the main centre of Bardonecchia with its restaurants and shops and only 30 metres from the ski bus stop.
Our apartment (number 7) was spacious and warm with plenty of radiators and two large balconies overlooking the back of the property. Wifi worked but only after 3 frustrating days of using our mobile data () but that's really our only complaint about the place. Plenty of hot water, comfortable beds on a mezzanine floor, making the apartment feel much larger.
The other downside is that the walls are very thin and it can get noisy when other families return from a night out. For a holiday at reasonable prices, give this place a try - I think you'll enjoy it!

Will write a full review later but just in case anyone is trying to decide whether to make a booking - do so. This residence is lovely. Very clean, very warm, very well appointed and really welcoming. Great pace to base yourself for a skiing trip.

Report response as inappropriateThank you. We appreciate your input.
This response is the subjective opinion of the management representative and not of TripAdvisor LLC
View more reviews
PreviousNext
12…17
<script type='text/javascri