US$85
View deal
Free cancellation until 29/01/22
Reserve now, pay at stay
Expedia
Prices are the average nightly price provided by our partners and may not include all taxes and fees. Taxes and fees that are shown are estimates only. Please see our partners for more details.
Midnight5001
2

Good for a Night

Simple hotel. I debated giving it 3 or 4 stars. Three stars for the location and the small room given the price. There was hot water at night but not in the morning. The room comes with 2 bottles of water. They charge $1 for any additional bottles. Coffee and tea are available in the room. The room was clean and the bed comfortable. Service inside the hotel was great. The driver from the airport confirmed that I was the guest and then did not speak to me again. I had to keep logging on to the internet. I think that this room was a little pricey for what you get. More 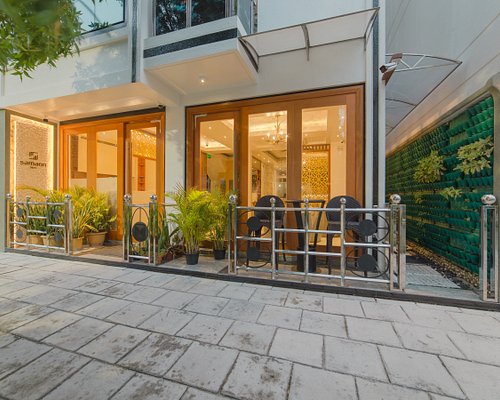 Hotels.com
View deal
Expedia
Agoda.com
US$77
Booking.com
US$103
View all 8 deals from US$77
380 reviews
0.1 km from Rivethi Beach Boutique Hotel
We compared the lowest prices from 8 websites 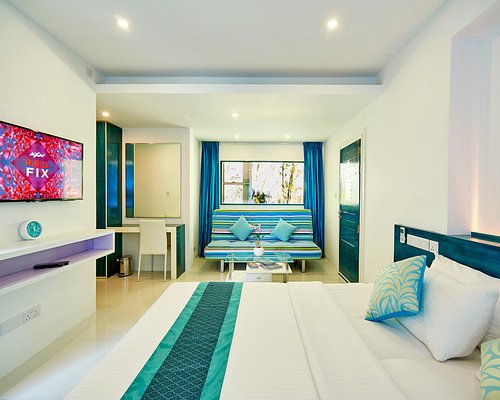 The room is clean and comfy. And the hotel is with lift, thank God. Friendly and helpful hotel staff. it is great that it comes with the airport transfer. Unfortunately we missed our shuttle time that we need to get a paid taxi to the airport. Close vicinity to the airport and a good place for a transit or stay for a few days to shop in Male before or after your island getaway. Love the rooms with the ocean view.

This review is the subjective opinion of a Tripadvisor member and not of TripAdvisor LLC.
lisaitalyMilan
milan
118145
Reviewed 18 December 2019
BAD EXPERIENCE

Checked us in but then sent us to another hotel, (made excuse but it was obivously an overbooking). I chose Rivethi Beach because of good reviews, that it had a lift (we are both 69 years old and both have problems climing stairs) and the position. We were moved to a hotel on a busy street, bad reviews, stairs and landings were dirty and we were given a room on the THIRD FLOOR, and there was no lift- We were practically prisoners as we could only manage those stairs one more time before leaving. We could have foregiven the move if we have been moved to a hotel similar to what we had expected from Rivethi Beach but our experience in the other hotel was terrible- I would never have chosen or booked that hotel so why did I end up there?

This review is the subjective opinion of a Tripadvisor member and not of TripAdvisor LLC.
Debbiedupreez
Perth, Australia
266
Reviewed 12 December 2019
Basic at best.

I booked through an online site that gave this hotel a 7.7 out of 10. The images and description painted a picture of a modern, roomy hotel with great beach views. We were going to use this as a "day room" booking in at 1pm and staying till our red eye flight. This looked like a great location to have lunch on the beach and soak up some last minute sun before our trip... In reality the images are very misleading. Across the road was NO café or café like setting as depicted. In fact a very derelict stretch of not too clean beach with a broken chair was our reality. So we were forced to spend our time in our room trying to nap - impossible due to the ongoing renovations we were not informed about. The rooms are clean but the bathroom is TINY, so small in fact you have to step in, close the door to reach the basin or go to the loo. Also bathroom supplies are very basic. Don’t believe this will be suitable for anyone staying longer or for those with kids.

As with other reviewers we also had to wait for nearly half an hour for our included transfer despite them requesting our flight details AND me emailing them to confirm the day before. In fact we were told someone would be waiting for us with a "Rivethi Beach" sign when we get off our flight. After a few minutes of waiting and looking we got worried and got someone to call the hotel who casually advised they are sending someone and they will be there in 15-20 minutes!

I am not sure how the hotel got or maintains its rating but we found it basic at best.

Room tip: Beware of online images! NO cafe style area on beach and while it does offer beach views they are of a pretty darelict beach.
Ask Debbiedupreez about Rivethi Beach Boutique Hotel
1  Thank Debbiedupreez

This review is the subjective opinion of a Tripadvisor member and not of TripAdvisor LLC.
Phil1922
24
Reviewed 27 November 2019
Overpriced

Be careful before booking this property. Ask for photos of the property which you have booked. They switch your room without informing. There is construction work going on which starts at 8:30am and goes on until 5pm. It looks like they have just started the construction work it might take few months to get completed. The bathroom of the deluxe room is very compact. There is hardly any place to move. No hot water which was informed at the time of arrival.
Their free transport service is not good. Was waiting at the airport almost for an hour. At the time of check out they will not even for a minute.

This review is the subjective opinion of a Tripadvisor member and not of TripAdvisor LLC.
JetStar8
Cape Town Central, South Africa
1724
Reviewed 1 October 2019 via mobile
Pathetic excuse for a hotel

I booked the most superior room available but had to cancel my booking within a few hours of arriving at Rivethi Beach Hotel Hulhumale as the condition of my room was a disgrace and unacceptable for an apparent 4* rated hotel. I think even a hostel may offer better accommodation!

I paid US$455 for bed linen and towels that were not just discoloured and old but had a damp and stale odour.

There is not a drop of hot water available both in the wash basin and shower.

They also had no bars of soap or alternative available at the wash basin and when I called to enquire I was told there was none available.

The room and bathroom were extremely small and can cause even the bravest to have a few anxiety attacks due to the very small cramped room and tiny bathroom space.

Lets also not forget the construction work that starts during the early hours of the morning or the lift that hasn't been working for months.

The so called manager Irfan is very unethical and is shameless in his illegal behaviour and thought nothing about withholding the US$455 for accommodation that was not used or a hotel that made it impossible for me to live in.

The matter has been referred to the Maldives tourism board and Police services.

This review is the subjective opinion of a Tripadvisor member and not of TripAdvisor LLC.
View more reviews
PreviousNext
123…
<script type='text/javascript' crossorigin='anonymous' async on