Agoda.com
Trip.com
FindHotel
View all 7 deals
Prices are the average nightly price provided by our partners and may not include all taxes and fees. Taxes and fees that are shown are estimates only. Please see our partners for more details.
gardenofengland
Folkestone, United Kingdom
823451

After being let down by another hotel we managed to book in here for a one night stay during the lockdown in Spain. We were so grateful to the staff as they were closing the next morning. Booking in was good, the receptionist was friendly helpful and suitably protected. We had a room on the first floor overlooking the petrol station, due to the restrictions it was very quiet. Room was big and clean, although I did clean all surfaces door knobs taps etc. again with antibac spray. Bed was big and very comfortable and the WIFI was good but we only noticed one other car so the place was pretty empty. We did not take the optional breakfast as we had brought our own food for our long journey back to the UK after our Brittany ferry being cancelled 3 times! We were advised we would need to check out by 8am but that was not a problem. The only negative was no hot water, this maybe because the hotel was closed and only open for stranded travellers. But a good nights sleep and a good location.More

Show less
Trip type: Travelled as a couple
See all 112 reviews
Nearby Hotels 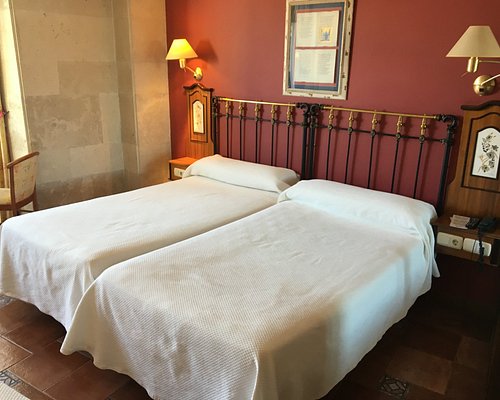 Hotels.com
View deal
Booking.com
ZenHotels.com
US$82
Web Oficial
US$86
View all 8 deals from US$82
763 reviews
2.7 km from Hotel Las Terrazas
We compared the lowest prices from 8 websites 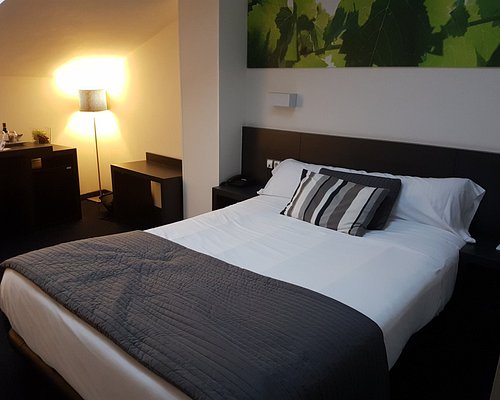 well this is a budget hotel and yes half of it was a building site but it was clean enough with a good hot shower and a comfy bed. there was a three course menu including wine for eleven euros with no shortage of takers. so budget but fine.

This review is the subjective opinion of a Tripadvisor member and not of TripAdvisor LLC.
Judith H
Holmfirth, United Kingdom
14556
Reviewed 12 April 2019
Building site not as the website suggests avoid at all costs

After an amazing 7 weeks in Spain I’d booked this hotel as a quick overnight Travelodge type hotel before the ferry from Santander. On arrival it was absolute chaos both in the car park, “hip” bar and minuscule reception which was a temporary construction behind a temporary wall off the bar. There were no apparent habitable rooms on the first two floors but the windows on the top floor seemed more complete. I could not stay due to mobility problems and tried to explain that I needed to cancel. Eventually I was told I had to do this through the booking website. I have been charged as per the cancellation policy however I have registered a complaint by email. I have yet to receive a response and sadly don’t expect to receive one. Less than 2km away towards the motorway is a lovely 4 star hotel that is virtually the same price as this one. When I booked in January the reviews were good however I’m rather suspicious about the authenticity of these now. I should have taken photos but was so upset and intimidated by the chaos that I had to drive away. Caveat emptor!

This review is the subjective opinion of a Tripadvisor member and not of TripAdvisor LLC.
David G
Inverness, United Kingdom
443213
Reviewed 22 October 2018
Never Again!!!!!!!!!

We were checked in reasonably well by a lady who had good English and the room and bathroom were very clean and tidy however there were some low parts of the ceiling in our bedroom. I had no chance, I banged my head three times and never ventured to that side of the bed again, dispatching my wife to sleep on that side, but even at 5’ 2 & and a quarter inch she had the odd mishap too! Thankfully no bruises came out?

I did drop off but was reawakened at 07:00 when the very same mans wake up alarm went off. It sounded for about 10 minutes, it even woke my wife up and that’s saying something.

We went down to breakfast and I had to ding the bell on reception twice so we could be directed to the breakfast area. A man eventually came along and showed us in to the public bar where lots of locals lined the bar, drinking coffee and eating all kinds of things.

We found tables where there appeared to be other hotel guests all tucking into differing delicacies, we took a seat at a table without anything on it at all, no cutlery or plates. I looked around, I did a bit of snooping but alas I found nothing that resembled breakfast items.

Then the very same man came to us and told us to order at the bar. So we tried and we got nowhere, all we got were two bits of toast, an orange juice each and I had the tiniest coffee cup that there could ever be, there was about 14 molecules of coffee in it.

Personally I think the staff were so run off their feet they couldn’t give a dam about two British visitors who had paid a modest sum for accommodation with breakfast, and left them to it. Not the kind of hospitality I would expect. I would normally have complained but I could see the fella could not give one stuff so I left it. He could quite easily have given us a few local items to choose, we aren’t fussy.

I won’t ever be back, not likely I know, and so did he, he cared that little.

My wife and I run our own small B&B in the UK, I believe its very important that when people have chosen you to provide them with accommodation and food that you do so to the best of your ability and make the experience as good as possible, I’m sorry to say we didn’t get our kind of attitude on this occasion.

This review is the subjective opinion of a Tripadvisor member and not of TripAdvisor LLC.
Nicq
Montreal, Canada
765332
Reviewed 21 July 2017 via mobile
Truck stop

This hotel is located outside of town at a truck stop.
The service is minimal and the rooms stink of smoke.
The beds are uncomfortable and it's hot.
I guess if your on a budget for one night but don't expect much.

This review is the subjective opinion of a Tripadvisor member and not of TripAdvisor LLC.
FlyAtNight
Brooklin, Canada
1131502
Reviewed 30 April 2017 via mobile
Not a lot of English spoken

This was the only hotel in a 15 day trip through Spain, France, Portugal and Poland where we had difficulty conversing with staff. But one shouldn't expect them to speak the language of every traveler. Struggling with the language and finally working things out makes traveling fun for me.

Checking in took a bit of time, mainly because the person at the front desk was also helping out in the busy bar/restaurant. Eventually things were worked out and we took the elevator to the second floor (a recent review stated there was no elevator). Our room looked out onto the back of the hotel which I felt was going to be quieter than the other side where the bar and restaurant were. The room was small, but very clean. The bed had a good mattress and nice linen. WI-FI was free and worked well in the room. Most importantly the room was quiet and we got a good night's sleep.

We had a meal in one of their restaurants (two delicious pizzas on very light crusts) and drinks later on the patio.

Checking out was fine, although I was charged 3.8 Euro for parking underground. The free parking is above ground, and there is plenty. We filled up the car at the gas station next door and left happily for Paris.

This review is the subjective opinion of a Tripadvisor member and not of TripAdvisor LLC.
View more reviews
PreviousNext
123…
<script type='text/javascript' crossorigin='anonymous' async onerror='__scriptLoadError(t