Booking.com
Agoda.com
Trip.com
View all 7 deals
Prices are the average nightly price provided by our partners and may not include all taxes and fees. Taxes and fees that are shown are estimates only. Please see our partners for more details.
GuidoKarp
Los Angeles, California
32693

It's an OK hotel - they started to modernize public areas. We had a number of events here - and already booked the next ones, so it's really OK.

Why three stars only? It's seen its best times, kinda dated - and we really had some awkward service issues here, multiple times. Last time, I wanted to check out the group (we were 20+ for our make-over-event Princess for one day). I was advised that they already charged the credit card on hold and had mailed the bill. Later, they charged me and said the bill was never paid. As we travel in three Mercedes vans (9 seaters), I had a bunch of people with me who all witnessed the situation. Still, the hotel behaves as if it was me who left the hotel without paying my bill. Not very nice, so make sure this does not happen to you when checking out.More 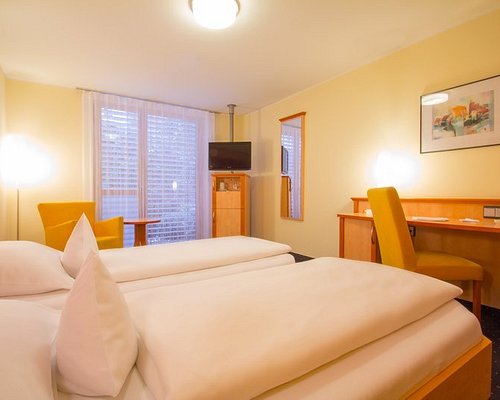 The hotel itself is quite outdated, the rooms are old & cramped but clean. No frills here. It’s close to everything in Karlsruhe & the train station, easy walks as well as quick cab rides to technology parks nearby. However it is the service and staff that allowed me to give the 4 star rating. The bar had awesome food, and the wait staff was super friendly and fast. We loved Christian - he was very professional & welcoming, and went out of his way to make sure we had a first rate experience. The front desk staff whom I wish I recalled all the names were also amazing & accommodating to our daily requests for taxi rides in taxis that would take our foreign credit cards. Thanks all!

This review is the subjective opinion of a TripAdvisor member and not of TripAdvisor LLC
Jeffreybrownreviews
Warren, Ohio
7314
Reviewed 26 January 2020 via mobile
Uninspired

We stayed for three nights while getting our house prepped to move out. Good location, but parking was 12 euros per day. We were told repeatedly that reservations were a must for the restaurant, and we called for 5.30. They took the reservation and said the restaurant would be open then. It wasnt. We had some way overpriced drinks in the bar, then had a great sous vide steak and a tiny langostino tail for 80 euros. The restaurant wanted to be a high end restaurant, with 5 to 7 courses, but ordering courses separately was the better choice for us. They were nice enough to serve bread, but it was the breakfast buffet bread (still out). And our waiter was the bartender from the bar, and nobody else ever showed for dinner. All in all it was just ok.

A very tired hotel. The reception staff weren't particularly welcoming. We booked this hotel with a restaurant as we were arriving after a 10 hour journey, only to be told that there was a problem with the restaurant that week. We therefore had to go in search of food in the town. The shower was fixed only half way up the wall, so not very comfortable. There is a secure underground car park (fee) but no lift and 3 flights of stairs.

This review is the subjective opinion of a TripAdvisor member and not of TripAdvisor LLC
NatalieD970
Rulzheim, Germany
5434
Reviewed 8 July 2019 via mobile
Long stay

Due to repair in our home we stayed over a month in this hotel.
Location good, suits big, room clean, staff lovely, breakfast was rather a 3 star.
What bothered us was being charged a daily rate despite long stay. So some weekend we paid double rate than during week
Recommend for families

This review is the subjective opinion of a TripAdvisor member and not of TripAdvisor LLC
akshayvir
Mumbai, India
2612
Reviewed 24 April 2019 via mobile
Very Good

The hotel is 10 min walking from the train station. The way is flat and it was easy to walk the distance with two heavy luggage. The way is along the city Zoo - a beautiful place to visit.

The reception was quick and efficient. We had taken room with two single beds. The rooms are spacious. A tree outside the window gave a nice feeling and cut us off the city. The bathroom was clean and neat. I somehow liked the bathroom of 301 - a different design, and looked nicer. 301 had a double bed which gave the room even more space. The wardrobe of 301 also had an extra panel which gave more space to put the second luggage at an appropriate height.

The breakfast spread was good with something for all. Bar has an interesting concept - recording of 3 musicians playing their instruments and each one projected on one TV panel. The ensemble was soothing and pleasing to the eye.

Check-out was equally smooth. No hassles.

The only irritant was one operational lift for Floor 1-9. The other lift was under renovation. So during peak time, it would be a painful wait.

All in all a good stay. A bit pricey compared to other places, but was worth the price. I would recommend a stay.