Agoda.com
eDreams
ZenHotels.com
Prices are the average nightly price provided by our partners and may not include all taxes and fees. Taxes and fees that are shown are estimates only. Please see our partners for more details.
Connie B
Philomath, Oregon
22

We felt very welcome. We love the room & the bath area. It was very luxurious. The breakfast was yummy. It had great access to walking trails. We got to watch movies and relax before setting out to start forestry work in Alaska. Thanks so much.

Room tip: We liked the South Suite downstairs, but all the rooms were very nice and cozy.
See all 234 reviews
Nearby Hotels 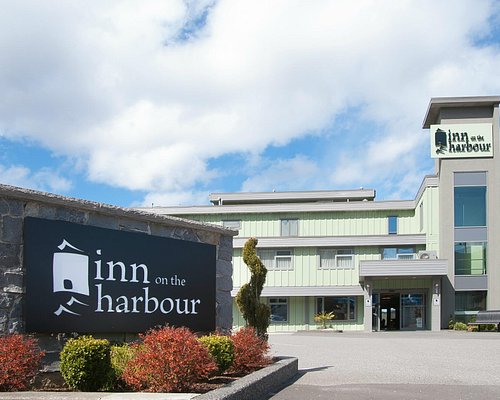 Breakfast included
Inn on the Harbour
US$132
Tripadvisor
View deal
Free cancellation
Reserve now, pay at stay
Hotels.com
Booking.com
Expedia
View all 8 deals from US$132
270 reviews
1.2 km from Tall Trees Bed and Breakfast
We compared the lowest prices from 8 websites 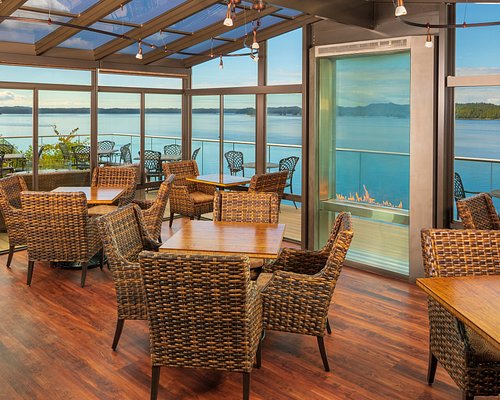 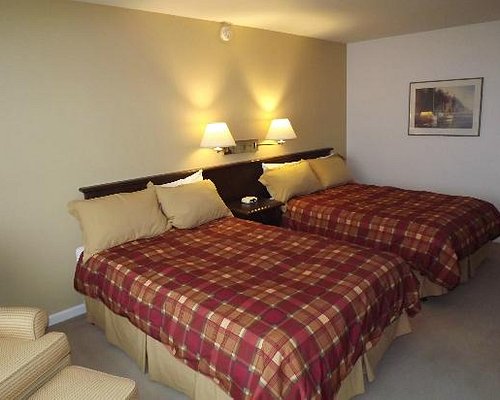 I booked the Tall Trees without knowing quite what to expect except that it was fairly cheap and seemed off the beaten track if a little worried that the description seemed too good to be true.

Yes, it was a very comfortable room, yes it came with free soda AND free wine, yes it was a three-room B&B about as removed from generic corporate hoteldom as anyone can get.

What I didn't expect was the amazing and friendly service, or quite how comfortable it would be, or the atmosphere— despite having only met Andrea when I checked in, I never actually felt like I'd essentially rented a room in a stranger's house despite that being technically what I'd done. The whole place has an atmosphere that's a little tricky to put into words; friendly, but also *personal* in a way that regular hotels just aren't.

Even leaving aside the service and atmosphere, the room itself had the comforts of a much higher class of hotel then I usually book, and yet it was only $100/night— less than the basic motel I booked in Juneau, AK just a few nights prior.

When I travel, the exact place I stay is something of an afterthought and determined only by price and a handful of very basic standards. However, I will probably make a point of passing through Prince Rupert on another trip just so I can stay here, and I will jam forks into my eyes if I ever say that about any hotel ever again.

Room tip: There are only three rooms, each of which is a bit different from the others. I stayed in the front room (the South Suite) but next time I'll try to book a different room for the sake of variety.
Ask Scatterburst about Tall Trees Bed and Breakfast
3  Thank Scatterburst

This review is the subjective opinion of a Tripadvisor member and not of TripAdvisor LLC.
Vickie W
Big Bear City, California, United States
1622
Reviewed 22 October 2012
Wonderful Bed and Breakfast!

This was a great experience for us - Andrea is a wonderful hostess and provides a 5-star accommodation that you aren't going to find anywhere else in Prince Rupert! She was very helpful in helping us with a very late arrival time. If you are coming in on a ferry, or if you are just visiting Prince Rupert, this should be your choice!

This review is the subjective opinion of a Tripadvisor member and not of TripAdvisor LLC.
CanadianJane1957
Barrie, Canada
8566
Reviewed 16 October 2012
Hostess with the Mostest, and a Wonderful Stay

The reviews before sounded as if Tall Trees would be the place we'd be happy to stay, off the beaten path, and nicer than a motel. The reality proved to be far better than what we had expected, even though our nights there were short. We knew that we'd be late arriving because of the ferry schedule, but a delay of over 5 hours due to fog at the start of Friday made me phone to warn Andrea, the owner of Tall Trees, that we'd be late - 4:15am rather than 1:15am. No problem she said, your beds will be ready, and just come in the front door, it will be open. True to her word, there she was when I opened the front door. She showed us to our rooms, and said that breakfast would be when we were ready for it. The other guests were having a breakfast about 9:45, so we said that would be fine. The accomodations were great - my room was by the door, but I heard nothing of others until I got up in the morning. As others have mentioned - the amenitites were great, and all you could ask for. The beds were wonderful (even more so after the bunkbeds of the Alaska Ferry). Breakfast was great - I had Andrea's french toast and my friend had an omelet. Andrea made us feel at home, and very welcome. When I asked about where to do laundry, she offered to do it for us - great when that is one of those time-wasting jobs when you're traveling. She told us how to take the trail to town, and recommended a restaurant for dinner - Dolly's. Both were great. We had to be up early on the Sunday morning for the train (as it turned out we could've slept in a bit later as the train was late leaving), and Andrea had made muffins and had coffee for us to get started on our day. We were really pleased with Tall Trees and would recommend it to anyone going to Prince Rupert. Oh yes, and my friend enjoyed the use of the DVD player in the room to see a couple of movies in his room.

This review is the subjective opinion of a Tripadvisor member and not of TripAdvisor LLC.
MackenzieCalgary
Calgary
2131
Reviewed 26 September 2012
Lovely hostess and accommodation and pet friendly

A very positive experience with lovely king size comfortable bed and excellent service . The dogs were very welcome and all areas were well maintained and very clean.
Breakfast was anything and everything you could ask for.

This review is the subjective opinion of a Tripadvisor member and not of TripAdvisor LLC.
selmy121350
Ajax, Canada
149
Reviewed 14 September 2012
Fantastic B&B in Prince Rupert, BC

What a great place to stay. There were four of us and we took the downstairs room and one of hte rooms upstairs. This place put some of the best hotels to shame. There were more amenities available in the room and bathroom than I have ever seen before. The young lady who owns and operates the place, sure knows what she's doing. The website is superb and you can believe and accept everything that is outlined... Great location, close to everything, especially Dolly's in Cow Bay....

Room tip: Fantastic main floor suite, pick this one if you can...
Ask selmy121350 about Tall Trees Bed and Breakfast
1  Thank selmy121350

This review is the subjective opinion of a Tripadvisor member and not of TripAdvisor LLC.
View more reviews
PreviousNext
1…282930…
<script type='text/javascript' crossorigin='anonymous' async onerror='__scriptLoadError(this,true);' src='https://static.tacdn.com/assets/assets/T8P