B&B Hotel Rubi
B&B Hotel Rubi
Lowest prices for your stay
Lock in the lowest price from these sites
US$56
US$46
Reserve now, pay at stay
View deal
Agoda.comUS$46
Hotels.comUS$56
ExpediaUS$56
Trip.comUS$47
FindHotelUS$49
Prices are the average nightly price provided by our partners and may not include all taxes and fees. Taxes and fees that are shown are estimates only. Please see our partners for more details.
745erhanhk
5021

The hotel as the building and comfort is a normal hotel not good not very bad that is Ok. But the place (area) is very bad first of all there is too much thiefs around hotel and hotel is not getting any security to protect their clients. Also when somethink stolen in front of the hotel that means on the chairs and desks that belongs to the hotel, hotel persons are looking this like a very normal think and not helpfull for the clients.
If I visit the Barcelona again I will never stay in this hotel and in this area.
As a last issue after thiefs has stolen our bags in front of the hotel we have asked for the camera records but the staff told that they can not share the records with us they can only give it to the Police.More 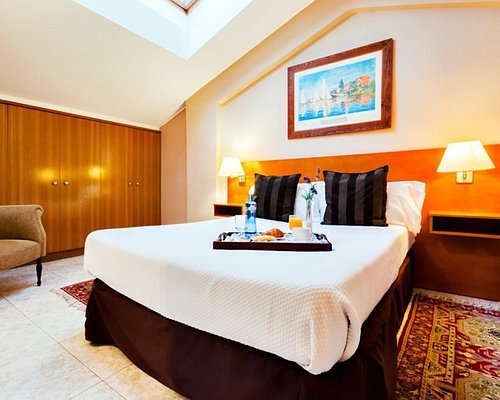 Aparthotel Park Sedo
US$75
Booking.com
View deal
Free cancellation
Agoda.com
US$61
Hotels.com
US$74
Expedia
US$74
View all 6 deals from US$61
123 reviews
0.8 km from B&B Hotel Rubi
We compared the lowest prices from 6 websites

For some €150 for 2 rooms for 5 people, this hotel was a pretty good deal. It's clean, the rooms are somewhat small but we were only there to sleep.

The staff was really nice, they all speak English and some speak French. They were very helpful in answering the questions we had (and my wife had a lot of them).

It's not in Barcelona so it's easy to park (there's an indoor parking and 6 spots outside), and the train station is 15-20 min away, walking. There are 3 free parkings on the way to the station but they fill up quickly. Barcelona is 35min away and since it's nearly impossible to park down there, the train is the best option.

The breakfast is expensive (€7.5 but it's a buffet so you can pig out). I wouldn't recommend the dinner though. There aren't many restaurants around but that's not much of an issue.

This review is the subjective opinion of a Tripadvisor member and not of TripAdvisor LLC.
812vladp
Timisoara, Romania
52
Reviewed 9 May 2018 via mobile
Worse than others

Staff cannot speak English enough to understand, internet is not working when the hotel is fully booked, the view from my room was a brick wall 2 m in front of me.
Will definitely avoid this one in the future