US$74
US$68
View deal
SAVE US$6
Hotels.comUS$74
ExpediaUS$74
Trip.com
Prices are the average nightly price provided by our partners and may not include all taxes and fees. Taxes and fees that are shown are estimates only. Please see our partners for more details.
JBear22
3

Lovely hotel and wet modern inside.

Hotel team were attentive and also respecting of my personal space. Great to see the mandatory wearing of masks being enforced throughout the hotel.

Thank you for the 5 star review and comments.

We look forward to welcoming you back soon.

Report response as inappropriateThank you. We appreciate your input.
This response is the subjective opinion of the management representative and not of TripAdvisor LLC
See all 1,904 reviews
Nearby Hotels 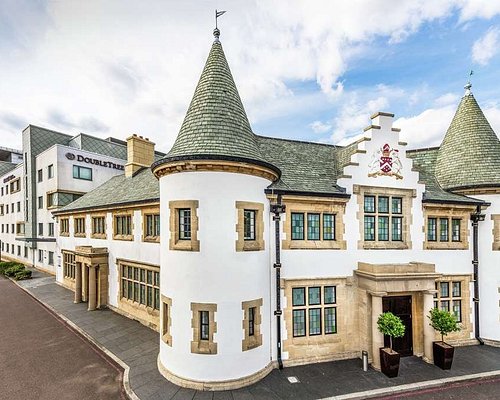 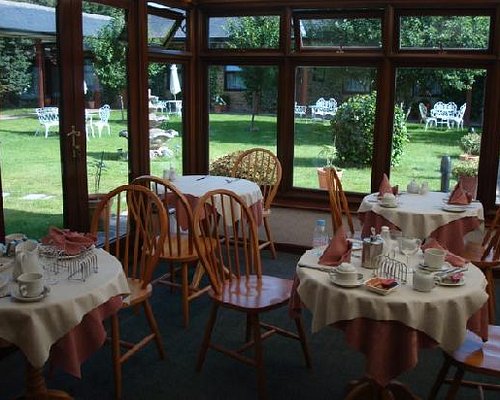 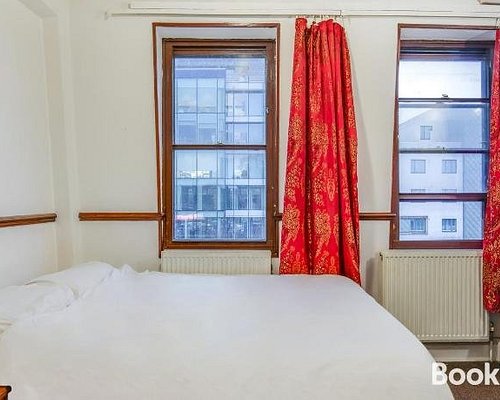 I needed a place to work during lockdown and decided to try Hilton's workspace offer. This hotel was not the place to sample it, and I shall not do so again.

For one thing the location is not very convenient by public transport (and the hotel staff were not able to give directions when I booked). But the overwhelming impression was of staff that took no interest in their customers. The receptionist on arrival was offhand; on my four trips through the reception area, staff were visible only once (at the bar, but they came over); and the staff working on my hotel floor when I went out totally ignored me and spent all their time talking to a male colleague in their own language - I believe either Russian or Polish - which created an impression that the guest was an unwelcome inconvenience.

The room itself was comfortable without being luxurious, and the bathroom was good although the toiletries were meagre. However, the unavoidable image of the dirty window (see photo) spoiled any positive impression they would have created.

Thank you for comments and your feedback, it is only through constructive comments such as those you have made that enables us to continually monitor and improve our service.

I am sorry to learn of your disappointment with no sighting of staff, speaking in their language and dirty window. I will pass your comments to the relevant department to look into it.

Thank you once again and I look forward to taking care of you in the future.

Report response as inappropriateThank you. We appreciate your input.
This response is the subjective opinion of the management representative and not of TripAdvisor LLC
275jasonr
Ruskington, United Kingdom
2815
Reviewed 10 December 2020 via mobile
Wrap up Warm

I chose this hotel as I have stayed here before, it’s close to my business meeting and well priced.
This stay was not great. My room was cold and having checked in early I put the air on on heat and waited for it to warm up - it warmed up 2 degrees over 4 hours but still didn’t get to my desired temperature or take the chill off the room.
I know dinner is difficult in these COVID times but this hotel was worse than others I have stayed in recently. 3 small take away type plastic tubs containing elements of my meal but no plate to put them on!
The drinks order was incorrect and smaller sizes than advertised. I went to the bar to get my free drink and there were no staff there!
I might stay here in the future but there are better options nearby during the winter and COVID times!
When checking out I told the receptionist about the heating problems - she told me that she would inform maintenance- thanks!

Thank you for comments and your feedback, it is only through constructive comments such as those you have made that enables us to continually monitor and improve our service.

I am sorry to learn of your disappointment with the dinner take away tubs, I am sure had you asked staff they would have provided you with the cutlery and plates if you required them, however we do not provide this with takeaway meals.

Regarding the heating I am sorry that your thermostat in the room did not reach the required temperature. I will have this checked immediately.

Thank you once again and I look forward to taking care of you in the future.

Report response as inappropriateThank you. We appreciate your input.
This response is the subjective opinion of the management representative and not of TripAdvisor LLC
perrygirl
England
109135
Reviewed 8 December 2020 via mobile
Comfort & convenience

I was checked in by a friendly man. I didn’t realise I had to pay £15 for parking which was a bit of a shock. It appears that you can’t stay overnight at any hotel near Heathrow without paying additional for parking. I paid £4 for breakfast which consisted of a box of cereal, milk, small box of orange juice, an apple and a croissant. You do not get coffee included in this. I wasn’t aware that you could not have a cooked breakfast. The good news is the gym was open. Only one person is allowed In at a time. It is a very small gym but adequate.

The room I stayed in was spacious with a big window overlooking the road. I was very surprised that you could not hear any noise from the road. The bed was very comfortable. there is a bathtub which is unusual.

There are a number of takeaways around the hotel. This is not a very smart area but the car park has CCTV everywhere. Right across the street there’s a Domino’s pizza. Many people had left their rubbish outside their doors from their takeaways. I was surprised no one came along and cleaned up during the night.

I drove to terminal 5 and it took me approximately 12 minutes.

Thank you for taking the time to share your experience about your recent stay at our hotel and for the 4 star review. Your comments will help us as we continually work to improve our guest experience. At DoubleTree by Hilton, we promise to do whatever it takes to ensure you are satisfied and hope you will consider staying with us in the future.

Report response as inappropriateThank you. We appreciate your input.
This response is the subjective opinion of the management representative and not of TripAdvisor LLC
Parkhurst111
Chester, United Kingdom
3752
Reviewed 8 December 2020
Cold with no hot water and vacant staff

Stopped for one night. Sold by what was advertised online. No heating in the room, just a fan that kept blowing cold air (yes i read and understood instructions but not working) turned fan off as making it even colder. No hot water from the Sink tap, left running indefinitely to see if eventually it would turn up. Shower took the time to make a coffee to warm up then as no Sink hot water had to Shave in the Shower. Became an Olympic gold medallist getting dressed as could see my breath. Breakfast was supposedly a pick pick up bag, no one on reception and no breakfast.. One i would certainly steer clear from in future... For a Hilton, made a Travel lodge look good.

Thank you for your 2 star review and raising these issues as it is only through constructive comments such as those you have made that enables us to continually monitor and improve our service.

I am sorry to learn of your disappointment with the no breakfast and hot water issues, please accept my apologies for this. I will investigate to see why there was no one on desk and hot water in the sink.
Please be assured that this is not our usual high standard of hospitality.
Please let me know when you are back so that I can take care of you.

Report response as inappropriateThank you. We appreciate your input.
This response is the subjective opinion of the management representative and not of TripAdvisor LLC
ibarisma
Sri Lanka
5460
Reviewed 1 November 2020
Very good experience (except for the check-in)

Almost does not look like a hotel, intriguing design. From the outside I thought the hotel might have been a church at some point in its history, but I later learned it was an old pub. Three night stay (20th-23rd). I arrived early and was surprised when the guy at Reception told me I could check in early, but I would have to pay a fee. I told him that my HHonors membership level benefits included ability to check in early for free whenever early checkin is available. He wouldn't budge though and I had to pay about £40 just to check in early. The room (504) was pretty small (tiny, actually) and I was glad that I was only staying for three days as it would have been inconvenient for a longer stay. I will add photos. Vending machines available near lifts.

(I wonder whether the hotel has experienced ghost stories. I felt a strong presence in my room the night before I left. And I am not usually that way inclined.)

Otherwise, my stay was pretty good. Full buffet breakfast in the large ground floor breakfast room, free newspapers available. Surprised that the breakfast hash browns were not great (I tried them everyday at breakfast); whoever makes them needs to learn how to make them properly. In fact, the buffet breakfast as a whole was quite bland every day.

I really like the structure of the hotel, including the long corridor leading across reception from one entrance to the other/parking lot.

The guy at reception when I checked in was the exception though, as other staff were extremely helpful and professional, I was impressed. E.g. the guy who went out of his way to help me with copies and the one who called me twice on my wake-up call the day I checked out just to be sure I was awake. They made extra effort to ensure my good stay. In particular, Aziki, Pedro and Rumen (thank you!).

Thank you for taking the time to share your experience about your recent stay at our hotel & the 4 stars. We sincerely appreciate your feedback and we are very sorry we did not exceed your expectations n regards to early check in. The hotel took its name from the Berkeley family who lived nearby at Cranford House. Their house was pulled down in the 1930s and only a few tombs in the parish church are there to remind us of how powerful this family once were. Your comments will help us as we continually work to improve our guest experience. At DoubleTree by Hilton, we promise to do whatever it takes to ensure you are satisfied and hope you will consider staying with us in the future.
Kind regards
Rukhsana

Report response as inappropriateThank you. We appreciate your input.
This response is the subjective opinion of the management representative and not of TripAdvisor LLC
View more reviews
PreviousNext
123…318
<script type='text/javascript' crossorigin='anonymous' async onerror='__scriptLoadError(